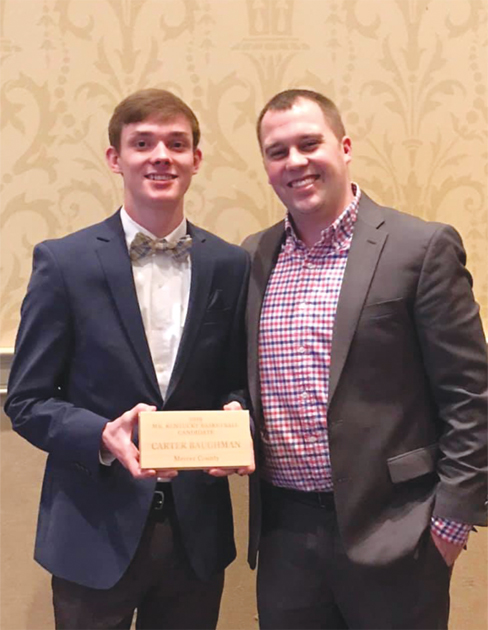 The Mercer County basketball program has had the honor of having two players in back-to-back seasons be invited to the prestigious Mr. and Miss Kentucky Basketball awards ceremony, the highest individual honor in the state of Kentucky for hoops.

Although Pendleton County’s Dontaie Allen, Baughman’s AAU teammate, took home the award, being invited to the ceremony as a candidate is a big deal.

“I was extremely blessed to be apart of that ceremony and be recognized as a Mr. Basketball candidate,” said Baughman.

He was surrounded by his teammates, coaches and family during the ceremony and said is lucky to have the utmost support.

“I was really lucky to have my family and closest friends supporting me. And for the coaching staff and their families to be there meant a lot of me,” he said. “I have been through so much with every single one of them and I was glad they were there to celebrate with me.”

Baughman didn’t like how the season ended for the Titans in the 12th Region Tournament, but talked about what it meant to be at the ceremony.

“I would have liked to be preparing for a game at Rupp during the time of the Mr. Basketball banquet and even though that wasn’t the case, this was a good exclamation point for my career at Mercer County,” he said.

Baughman finished his varsity career with 1,184 points and averaged 21.4 points per game his senior year.

Mercer County Head Coach Josh Hamlin coached both Faulkner and Baughman and talked about how special it was for the program and community to have two young men represent their program back-to-back years at the ceremony.

“It is tremendously special for our program, community, school and those young men. They are two extremely hard workers who devoted numerous hours in the gym on improving their craft,” said Hamlin.

Mercer County and Trinity High School are the only two programs to have repeat representatives at the ceremony.

“To have that is really cool and speaks to the level of our program over the last several years,” said Hamlin.

Baughman is currently undecided on his college choice.

For more great sports stories and Vaught’s Views, check out this week’s issue of the Harrodsburg Herald.