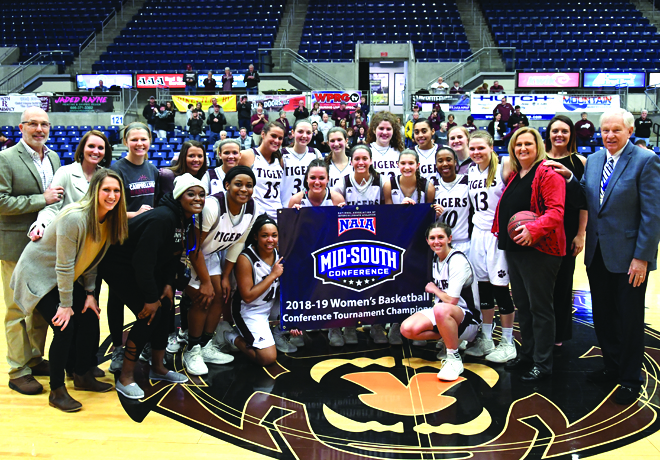 After a standout career at Mercer County which included two state titles, the Lake twins keep on winning.

Campbellsville freshmen Faith and Lexy Lake, along with the rest of the Lady Tigers, were crowned MidSouth Conference Tournament champions after defeating Shawnee State University by a final score of 64-50 on Monday, March 4,  at the East Kentucky Expo Center in Pikeville.

“Winning the conference tournament was an amazing experience. Being a freshman on such a talented, hard-working team is fun,” said Faith Lake. “Being able to have an impact as such young players gives me more experience for my years to come as a Lady Tiger. Being winners at the high school level was great, and continuing to do it at the collegiate level is a blessing.”

The Lady Tigers will be competing in the upcoming NAIA Tournament on Wednesday, March 13, held at the Rimrock Auto Arena at MetraPark in Billings, Mont.

“It was just an awesome experience to win the conference tournament during my freshman aseason,” said Lexy Lake. “To be a freshman and being able to make a big impact on the team has been great. Winning is always fun and it’s great to see all our hard work pay off.”