Burgin ends season with 20 wins for third time since 1943 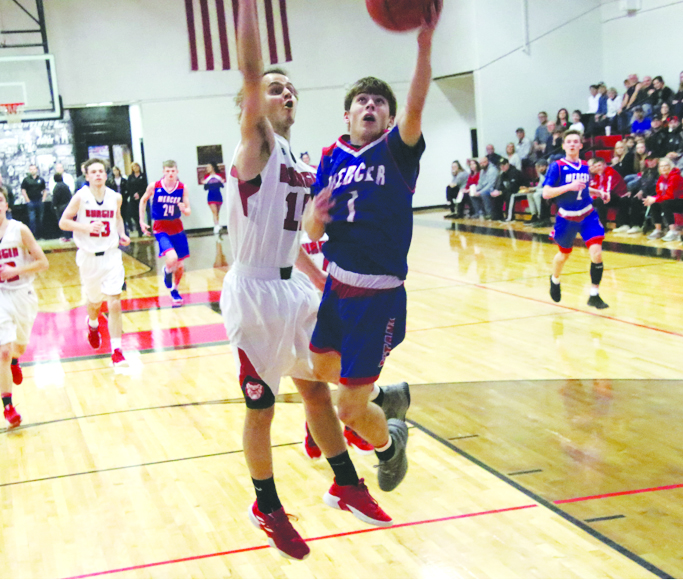 Mercer County junior Jamisen Lewis (right) finishes over Burgin senior Cameron Hurst on a fast break in the first round of the 46th District Tournament on Monday, Feb. 18. (Photo by Arpan Dixit)

The Mercer County Titans (18-10) got the best of the Burgin Bulldogs (20-9)  for the second time in less than three weeks, this time, with much higher stakes.

The Titans ended the Bulldogs’ season by a final score of 79-40 on Monday, Feb. 18, in the first round of the 46th District Tournament, held at Burgin.

Mercer senior Carter Baughman led the way for the Titans, as he has done all season. The floor general scored a game-high 19 points to go along with four rebounds and four assists.

Mercer juniors Kaelin Drakeford and Jamisen Lewis also had big games as tournament play began across the state. Drakeford scored 11 points to go along with four rebounds, while Lewis scored 13 points and dished out a game-high six assists.

Burgin senior Cameron Hurst was the top player for Burgin, scoring nine points to go along with four rebounds and four assists.

“We started off the game much better than the last time we played them, but we still didn’t attack and we weren’t the aggressors. This was a pretty physical ball game for us,” said Burgin Head Coach Don Irvine. “That’s the way the game was dictated. Mercer is a lot quicker than a lot of people think. Their quickness really bothered us. We were dependent on them missing some outside shots, but they didn’t.”

The Titans made 10 triples to clinch a berth in the 46th District Championship on Thursday, Feb. 21.

Irvine’s message to his team after the game was his appreciation for all his senior class has done during their Burgin careers.

“We love what the seniors have done for us. Their dedication, the time they put in and the leadership they’ve shown,” he said. “And I challenged the younger guys to get better and to build off this, whoever the next coach may be. I told them to continue from we’re at and use it as a step.”

After Kirkpatrick scored the first bucket of the game, the Titans went on a 13-4 run to force a Burgin timeout. They never looked back from that point on.

“In March, you win with seniors. They understand that if you don’t bring it, you run into the fact that you might never play again,” said Hamlin. “Lucky for us, we have seniors who don’t want to play their final high school game anytime soon. Nathan (Tatum) is a big part of that. He understands what we want, he’s a coach on the court and when he’s making shots, he adds another dimension to us.”

Tatum ended up with 10 points, two rebounds and two steals.

“The only thing we wanted to accomplish was get a win and secure a spot in the region tournament. That’s the only thing we were concerned with,” said Mercer County Head Coach Josh Hamlin. “Just to get a win in the postseason is something that is hard to do no matter who you play. To be able to do that tonight and have a lot of kids contribute was hopefully the start to a good run for us.”

Monday night’s game was the final game in the legendary 40-year career of Don Irvine.

Late in the fourth quarter, Hamlin took a timeout to recognize Irvine for all he has done for the game of basketball in the community. Irvine was greeted with a standing ovation and Hamlin talked about his impact after the game.

“When I first got the job at Mercer, Coach Irvine greeted me, told me congratulations and let me know if there was anything he could do for me. I picked his brain on a couple things and I always enjoy talking to him,” said Hamlin. “He does it for the right reasons. He understands the impact a coach can have on a community and society is not based on wins and losses. Thank you to Coach Irvine for what he’s meant to the area and what he’s meant to this district.”

Irvine said it was something he’ll never forget.

“It’s better than the alternative with everybody booing you out of the gym,” Irvine said with a smile. “It was a nice gesture on Coach Hamlin’s part and it’s something I’ll always remember. It’s nice to be thought of in a positive manner like that in your last game. I didn’t really know what to expect and how it was going to end up, so that was totally unexpected on my part.”

The Titans will be playing for the 46th District title for the fifth consecutive year  on Thursday, Feb. 21, against the winner of East and West Jessamine. The Titans are 2-0 against the Jaguars and 1-1 against the Colts.

The district title game should be a battle regardless of who the Titans will play. 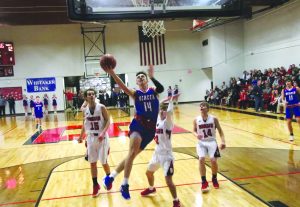 Mercer County Junior Kaelin Drakeford (14) drives in for two of his 11 points against Burgin in the first round of the 46th District Tournament on Monday, Feb. 18, in Burgin. He also finished with four rebounds and three assists in the Titans’ 79-40 victory over the Bulldogs. 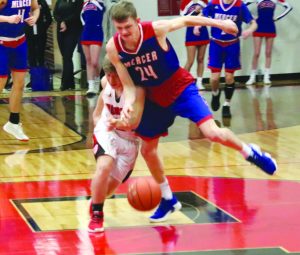 Mercer County senior Luke Dean (24) battles with Burgin senior Matthew Krikpatrick in the first round of the 46th District Tournament on Monday, Feb. 18, at Burgin. 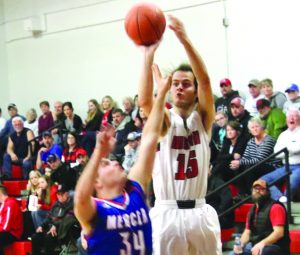 Burgin senior Cameron Hurst (15) elevates for a perimeter jump shot against Mercer County in the first round of the 46th District Tournament on Monday, Feb. 18. 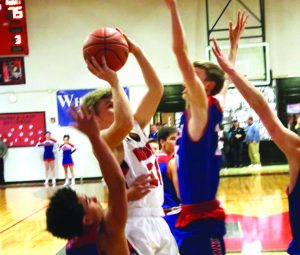 Burgin senior Matthew Kirkpatrick drives in between three Mercer County players for a floater in the first round of the 46th District Tournament on Monday, Feb. 18, at Burgin. 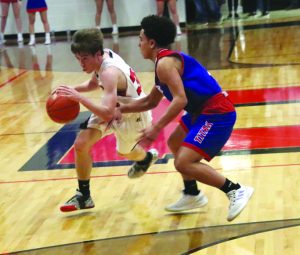 Burgin junior Seth Martin (left) attempts to drive by Mercer County freshman Brayden Dunn in the first round of the 46th District Tournament on Monday, Feb. 18.