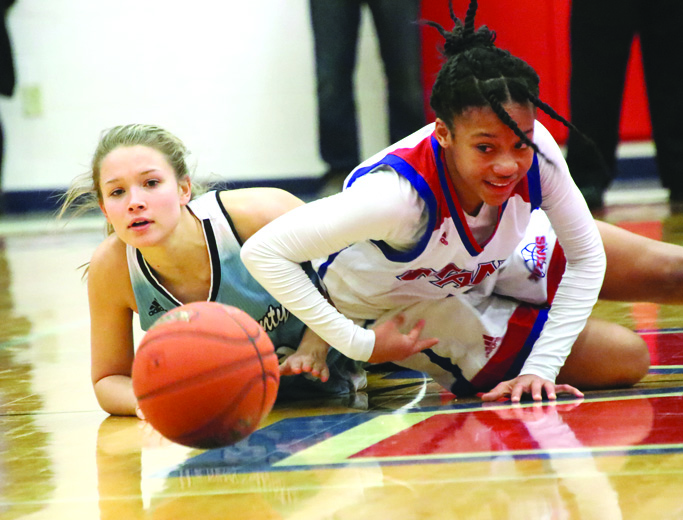 After suffering a tough defeat at the hands of 12th Region foe Casey County lat Friday, Feb. 8, the Mercer County Lady Titans (18-8) avenged that loss with two big wins on the road at Butler and Russell County.

Head Coach Hayley Spivey talked about the differences in the recent wins.

“I just feel like the girls have stepped it up defensively. We didn’t play great defense on Friday against Casey County,” she said. “But they have been disciplined the past two games on the defensive end.”

Mercer County has won their last three matchups against the Bearettes, including Saturday’s 72-62 victory.

Timberlynn Yeast led the way for the Lady Titans, scoring a game-high 26 points. Sophomore Camryn Preston followed Yeast with 17 points to round out the double-digit scoring.

The Lady Titans sank five triples out of 10 attempts and outrebounded the Bearettes 29-20, with Lewis leading the way with eight rebounds.

In one of the more intriguing matchups in the 12th Region, the Lady Titans (16-8) suffered their first region loss of the season at the hands of the Lady Rebels (19-7), by a final score of 62-59 on Friday, Feb. 9, on senior night.

Lewis was the top scorer for Mercer County with a game-high 20 points, including draining two triples.

McCombs added 13 points on senior night and Timberlynn Yeast scored 11 to round out the top scorers for Mercer County.

Junior Zoë Yeast was dominant on the boards, hauling in a game-high 11 rebounds.

The Lady Rebels started the game out on an 8-0 run, but Spivey’s bunch battled back and only made it a four-point deficit (19-15) after one quarter of play.

A strong lay-in through contact by Preston reclaimed the lead for the Lady Titans late in the second quarter, but Casey County managed to hold on to a 35-33 lead at the half.

Lewis’ triple gave the Lady Titans a 44-41 lead with 3:20 left in the third, but Casey County ended the third on a 13-3 run heading into the final period.

Mercer County was able to cut the Lady Rebel lead down to one multiple times in the final minute on baskets by Lewis and McCombs, but free throws by Lauren Lee and Natalie Duggins closed the game out and secured the win for Casey County.

“They (Casey County) slowed us down a little bit. We didn’t get to run out up-tempo game like we normally do,” said Spivey. “They are very disciplined on the offensive end and we struggled defensively tonight. The biggest thing was that they were able to slow the game down.”

Spivey also talked about the impact of her two seniors, McCombs and Makenzie Burns.

McCombs transferred in from Knox Central High School after her sophomore year and accepted a role that not many players of her caliber would, while Burns has battled injuries throughout her career and was able to suit up for her final home game.

“It’s a little bit more special for me because this is my first group of seniors. I’ve coached Makenzie (Burns) since middle school and she’s had to go through a lot of adversity with the injuries. She’s dealt with some more injuries this season, but she’s just a great kid. She’s going to go on a be a super successful adult,” said Spivey. “And with Toni (McCombs), she’s just a pure athlete. I’ve very glad that she decided to come to Mercer. She’s a really coachable kid and always does what is asked of her. That’s been really great for me to have two great seniors on and off the court. It’s made my job a lot easier and they’ve been a really big part of this program.”

The Lady Titans will be back on the court this Friday, Feb. 15, when they host Southwestern in the final game of the regular season. Tip-off is set for 7:30 p.m. 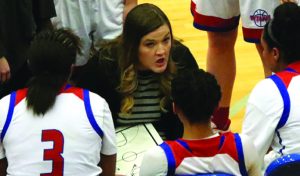 Mercer County Lady Titans Head Coach Hayley Spivey draws up a play for her team during a timeout against Casey County on Friday, Feb. 8. (Photo by Arpan Dixit) 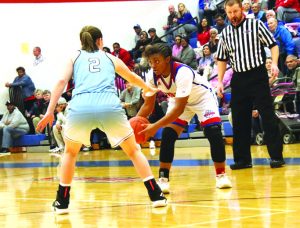