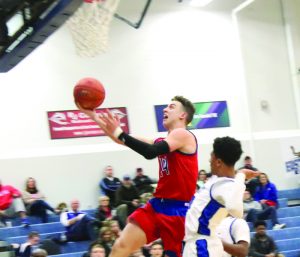 Junior Kaelin Drakeford drives in for two of his game-high 21 points in a big district win over East Jessamine on Monday, Jan. 28. (Photo by Arpan Dixit)

“This is one of the toughest places to play in our region,” he said. “East always plays a great game at home.”

Despite the hostile environment, the Titans escaped with a 57-46 victory on Monday, Jan. 28, to improve to 3-1 in district play.

Junior Kaelin Drakeford controlled the game from start to finish. The junior scored a game-high 21 points, hauled in seven rebounds, dished out six assists and also had four steals.

“That’s a stat line that you don’t see very often in high school basketball, but that’s a stat line Kaelin (Drakeford) is more than capable of putting in night in and night out,” said Hamlin. “He finished much better tonight.”

Hamlin gave credit to Coach Nick Barton and his Jaguar team after the game.

“Coach Barton does a great job with his team. For whatever reason, East always plays their socks off here,” said Hamlin. “That’s just a credit to them. It’s one of those games we had no business winning tonight. We did not play well, but a bad win is better than a bad loss. Our kids made winning plays when it counted.”

Senior Isaiah Smith, who has been getting more comfortable game-by-game, scored nine points.

Senior Nathan Tatum added five points, while junior Jamisen Lewis added four points to round out the scoring for the Titans.

Senior Luke Dean, despite not scoring, made an impact on the defensive side of the ball with two blocks and four rebounds.

The Titans trailed early in the first 7-6, but went on a 8-2 run to force an East timeout midway through the first. The Titans held a four-point lead after one.

Play was stopped due to injury midway through the second quarter. East Jessamine’s leading scorer, Tyler Pitney, was forced to leave the game after taking a hard hit to the head. Despite losing Pitney for the rest of the game, East battle and only trailed Mercer County by three, 24-21 at halftime.

Kenzel Watkins led East Jessamine in scoring with 11 points. He was the only Jaguar in double-digits.

After East started the third on a  run, taking the lead, Baughman’s steal and coast-to-coast lay in reclaimed the lead for the Titans with one minute to play in the third.

The closest East managed to get for the rest of the game was two, 43-41, with five minutes to play.

Drakeford and Baughman both made key plays down the stretch, whether it was taking a charge or hitting free throws, to seal the big district win.

The Titans will be back on the court today, Thursday, Jan. 31, when they travel to take on Burgin at 7:30 p.m. 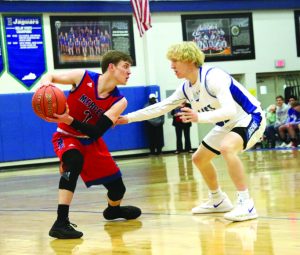 Mercer County senior Carter Baughman (left) scans the defense at the top of the key in a win over East Jessamine on Monday Jan. 28. Baughman finished with 18 points. 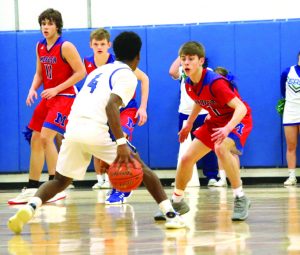 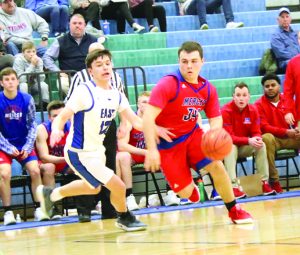