Burgin HC to step down at end of season 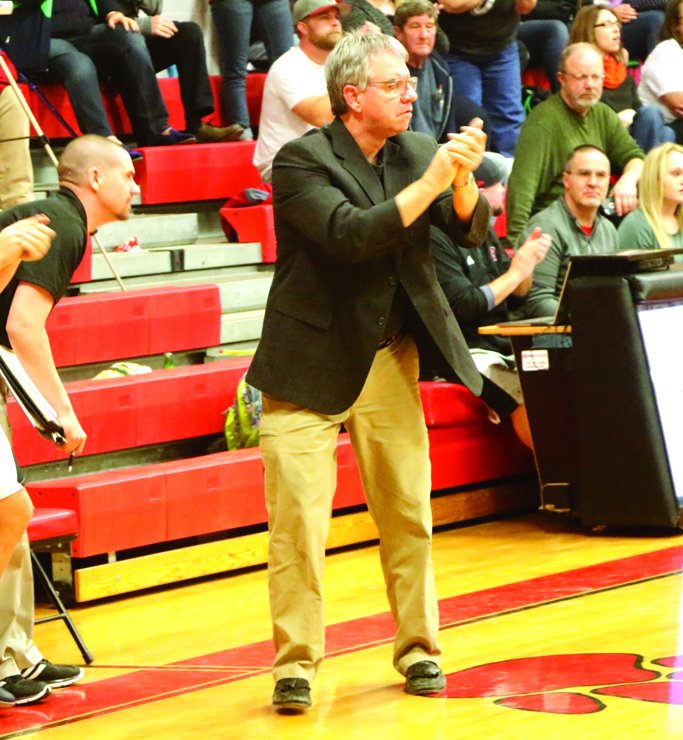 Burgin boys basketball Head Coach Don Irvine is calling it quits at the conclusion of this season. He has won over 200 games at Burgin. (Photo by Arpan Dixit)

“The Legend” as he is known around town is calling it quits. This time for good.

This is his 38th season coaching high school basketball. He talked about why he decided to step down at the conclusion of the 2018-2019 basketball season.

“Basketball has given me the chance to get an education and also I’m just in love with the game and in love with the people who dedicated themselves to the game,” he said. “I always jokingly say if you think I’m not a very good basketball coach,  you ought to watch me cook.”

He said inspiring kids to be better on and off the court is a big motivation.

Irvine’s first retirement came after the 2011-2012 basketball season. Irvine retired to take care of his late father, who passed shortly after he retired.

“So I’m retired and I got nothing to do. I went ahead and was kind of a journeyman. I thought I would stay at Garrard for a while, but when Burgin offered me the opportunity to come back, I jumped on it,” said Irvine. “I came back to be the athletic director. I didn’t think I was going to coach but it just worked out that way.”

He also suffered a life-threatening scare that’s much bigger than the game of basketball. Irvine was diagnosed with prostate cancer in the middle of the 2013-2014 season while at Garrard County. After going through surgery and treatments, he made his way back to the bench a month later.

“It was killing me to not have my team. No matter how sick I was, It just bothered me,” he said. “But I’ve had a tremendous amount of support from everyone around me.”

Irvine and his wife Nancy have two sons, Zack and Sam, who have been supportive throughout his coaching career.

“My family is excited for me. They thought I should’ve done this a long time ago,” Irvine said with a smile. “They also want me to be happy. They’ve been very supportive throughout the years in anything that I’ve wanted to do. My wife had to uproot and move a couple times, when I know she didn’t want too.”

Irvine, a 1977 gradaute of Pulaski County High School, a bigger school than any of his coaching stops, has always enjoyed coaching at a small schools in small communities.

“First of all, you’re usually the only game in town. Basketball is the number one sport because a lot of the smalls schools we compete against, including Burgin, don’t have a football program,” he said. “I like that I knew everybody in K-12. A lot of the bigger schools in surrounding areas are disappointed if they don’t go to the regional tournament. If we get to go or do something exceptional like winning a holiday tournament like we did this season, it’s huge for us. I really liked enjoying the successes rather than explaining the failures.”

Irvine has won over 200 games at Burgin, and over 370 games overall. When asked what has been his favorite part about coaching, he gave a simple answer.

“The players,” he said. “When they come back, I want them to feel welcome. I love when I get to visit with them and see their families. I know that sound cliché, but it’s true. The relationships you build last a lifetime.”

Irvine said surrounding yourself with people you enjoy also helps while coaching a long time.

“Just think of anything you’re in. If you’re around 15 people you despise all day, you’re not going to do that for 40 years,” he said. “They keep you young. Just to see how happy the kids gets sometimes when they have that success makes you feel like you’re part of that.”

Assistant Coach Dennis Berry, a 1999 Burgin graduate, has been in the Burgin boys basketball program for the past seven years, and was apart of the previous coaches’ staff. Irvine decided to bring Berry back and he’s been by Irvine’s side ever since.

“It could have been easy for Coach Irvine to come in and clean house, but he brought me in and said he wanted to keep me. I was really grateful for that opportunity,” said Berry. “Just these last four years, he’s been a great teacher. I feel like I’ve learned a lot from him working under him, watching him and the way he does things. It’s been an awesome learning experience for me, and like I said as a coach, I feel like he’s helped me grow a lot. He’s been really supportive of me. It’s been an honor working with him.”

Irvine talked about what he would tell a younger version of himself just entering the coaching ranks.

“I’d say to be sure that you really learn and get to know your players. Make your players the focus of it,” he said. “And to use as much experience and wisdom as you can. I thought I knew everything when I first started coaching at Augusta. I think if I’ve learned anything, it’s been patience and experience.”

Like Irvine said, he still plans to be around basketball, but you can always catch him at the local Olde Bus Station, drinking a cup of coffee and eating his favorite meal.

Don Irvine will always be “The Legend”.