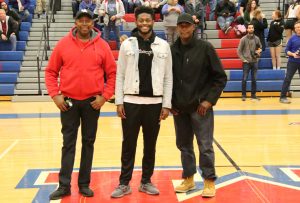 Former Titan and 2018 Mr. Kentucky Basketball Trevon Faulkner (middle) is pictured with his father, Sidney Alcorn (right), and his uncle, Tim Alcorn (left), before unveiling a banner honoring Faulkner’s accomplishments as a Titan on Tuesday, Jan. 22. (Photo by Arpan Dixit)

A Mercer County basketball legend finally got his due last Tuesday, Jan. 22, at halftime in a battle between Mercer and Boyle County.

2018 Mr. Kentucky Basketball and the all-time leading scorer and rebounder in Titan history, Trevon Faulkner, was honored with a banner (3B) for his accomplishments during his varsity career.

At the time, Faulkner was one of only five players in Kentucky high school basketball history to achieve over 3,000 points and 1,100 rebounds.

He is also the winningest player in Titan history, compiling a record of 136-51, to go along with one region title, four district titles, first team all-state and 12th Region player of the year.

Faulkner was surrounded by his family during a special moment.

“Having my family there to see that banner come down was a very special moment for me,” said Faulkner. “I got a little emotional because I worked so hard and having that hung up in that gym is a blessing. It’s an honor to be a Titan forever.”

His former coach and current Titan head coach, Josh Hamlin, said hopefully the school can have it where No. 12 will never be worn by a Mercer County player ever again, but while his staff is there, dont expect to see that number on the floor.

“We’re making the push to get it to where nobody can wear No. 12. I say it will probably happen within the near future, but as long as this coaching staff is here, nobody is going to wear that number,” said Hamlin. “Trevon deserves that. It’s great having him back. His smile lights up the whole gym as soon as he walks in. It’s without a doubt he is the most important basketball player that has played in this program’s history. The accolades just go on but you get a better kid. Just to be able to give him a hug, talk to him for a little bit and see how happy people were to see him back is the best feeling in the world for our program and our coaching staff.”

Faulkner talked about what it meant to him knowing that No. 12 wouldn’t be worn again under Hamlin and his staff.

“It’s an awesome feeling knowing nobody will wear No. 12 again. I worked really hard throughout my high school career and for things to start falling in to place like they are is a blessing,” he said. “I would like to thank the whole community of Mercer County, my teammates and coaches. It was an unbelievable experience and it’s awesome knowing I’ll always be a Titan.”

Faulkner is currently starting for Coach John Brannen at NKU. He is currently averaging five points per game, while hauling in three rebounds per game. 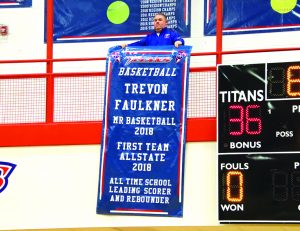