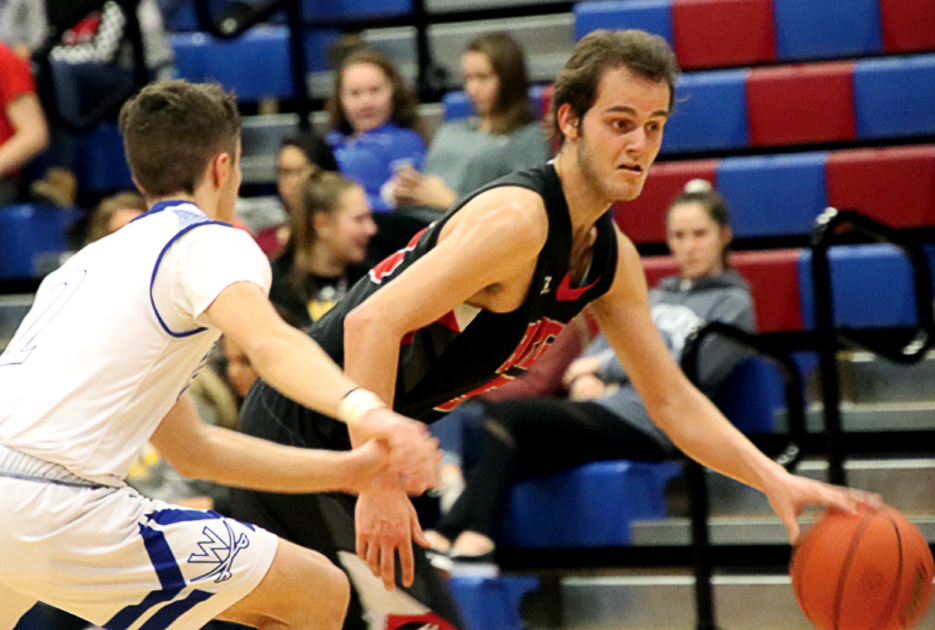 Senior Cameron Hurst looks to drive by his defender in Burgin’s loss to Washington County in the All-A Classic semifinal on Thursday, Jan. 17.

After defeating Danville Christian Academy to advance in the 12th Region All-A Classic last Monday, the Burgin Bulldogs (11-4) saw their run for the All-A title end to the host school, Washington County (11-5), by a final score of 78-61 on Thursday, Jan. 17.

Senior Cameron Hurst was the top scorer for Burgin with 25 points. Senior Matt Kirkpatrick was the other Bulldog in double-figures with 12 points.

After the Commanders started the game on a 6-0 run, which forced a Burgin timeout, the Bulldogs stormed back to make it 21-14 after one quarter of play. Kirkpatrick and Hurst combined for 12 of those first 14 points for Burgin.

“I thought the first few minutes of the game, we came out a little tentative and nervous. The goal seems to get bigger when you’re ahead by a few points,” said Head Coach Don Irvine. “Their size and strength wore us down and they were able to get many second-chance opportunities because of it.”

Drew Yates led Washington County with a game-high 35 points. Cameron Willis added 21 for the Commanders. Both Yates and Willis average 17 points per game on the season. Irvine talked about the game plan heading into the game.

“We just wanted to get up on their shooters the best we could and keep the ball out of the middle of the paint the best we could,” said Irvine. “And I thought for the most part, we did. We hung around keeping it under 10, but we got fatigued and couldn’t force any turnovers.”

The Bulldogs only trailed by eight at the half, 42-34.

Kirkpatrick made a few hustle plays, which he seems to do just about every game, to bring the margin within 10, but like Irvine said, the fatigue sat in.

The Commanders were able to force a few turnovers late, which attributed to the 17-point win.

The Bulldogs will be back on the court today, Thursday, Jan. 24, when they hose Eminence at 7:30 p.m.