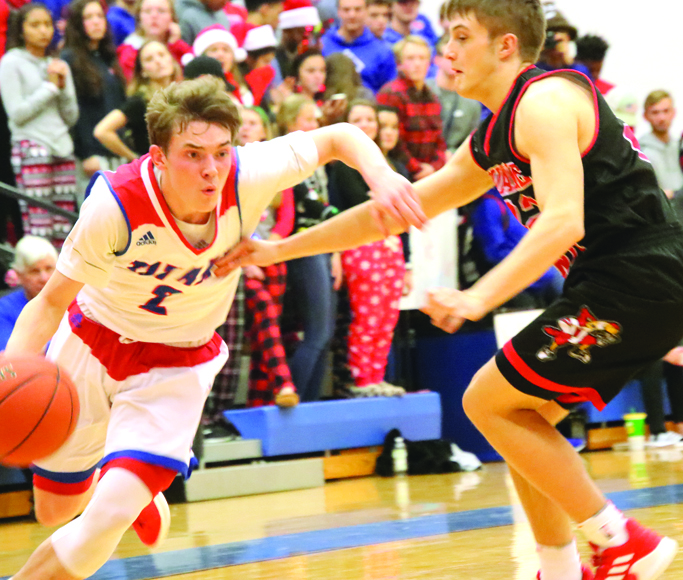 Senior Carter Baughman drives to the basketball against Wayne County on Monday, Dec. 17. Baughman is averages 23 points per game in his senior campaign. (Photo by Arpan Dixit)

It’s been a very impressive season for one of the 12th Region’s best players.

Mercer County senior Carter Baughman has been on a tear this season, averaging 23 points per game (20th in state), while shooting 48-percent from the field.

Baughman recently achieved an impressive milestone. He scored his 1,000th point in a win against district rival, West Jessamine on Friday, Jan. 18.

“For me to get 1,000 points in less than three years was something that I thought just showed the amount of work that I have put in. From not dressing varsity my freshman year and than looking at the progression from sophomore year to junior year to now,” said Baughman. “I never imagined joining that club growing up, but now that I have done it, I have realized how blessed I am to play this game with my teammates and our coaching staff.”

Some more accolades this season for Baughman includes an All-Tournament Team performance at the Cumberland Falls Invitational in Corbin right after Christmas. Baughman also won the three-point contest. He is currently making 3.4 triples per game (9th in state), while shooting 45-percent from beyond the arc. He was also named Player of the Game at the Nissan Classic against Sheldon Clark back in late-November, and was named to the All-Tournament Team after the Clash of the Titans Tournament, held at MCSHS right before Christmas.

“Carter has been working for moments like this his whole varsity career. He works tirelessly in the offseason and in season to be able to shoot and play the way he has been. We are glad he is on our team,” said Mercer County Head Coach Josh Hamlin. “I’ve been really lucky and fortunate to coach Carter back when he was in eighth grade. When he was a little younger, he expected everything to go perfect. We’ve had conversations about that this year being a senior, and he’s been a great leader for us. His junior and senior year, he has really come on. He is the best player in this region hands down. I’ll fight for that kid until I can’t fight anymore, and I couldn’t be happier for him getting this milestone.”

Baughman’s numbers through 19 games certainly garner him attention for 12th Region Player of the Year, but he is not worried about that.

“I have been hearing all player of the year talk throughout the season, but have tried to block that out and just focus on what we have needed to do to get better as a team,” said Baughman.

If he is fortunate enough to win the award, it’s something that he won’t take for granted.

“If I am blessed enough to earn that award come the end of the season, I will feel extremely honored and blessed to represent Mercer County as 12th Region Player of the Year,” he said. “I personally think that a player of the year candidate is someone who carries themselves with class on and off the court and is constantly trying to look for ways to improve the team.  A player of the year is also a player any other team in the region knows they have to prepare for going into a game against them.”

The Titans struggled to start the season, going 2-5 in their first seven games, but have made a major turnaround due to Baughman and his teammates. Since starting 2-5, the Titans have gone 9-3, and are surging up the 12th Region rankings.

“A few of us as upperclassmen had a talk and realized that this was our last go around with the rest of the guys in the locker room and we all want it to be something special. So at the end of the day, we just want everyone on our team to go do what is best for the team and have fun while doing it,” said Buaghman. “If everyone on our team foes that, then everything else will take care of itself.”

Baughman currently holds two offers, one from Brescia University (Owensboro) and one from Asbury University (Wilmore). Expect his recruiting to ramp up towards the end of the season as the accolades continue to roll in. Transylvania University and Centre College have both offered rosters spots to Baughman. Both schools do not offer athletic scholarships.

Baughman’s AAU coach for M.A.T.T.S. Mustangs, Steve Quattrochi, has seen Baughman develop his game in the summer and had plenty of praise for the senior.

“I’ve coached Carter since his seventh grade year, and he has made tremendous strides in every aspect of his game and became the best player in the 12th Region as a senior,” said Quattrochi. “He has the ball in his hands majority of the time and rarely makes the wrong play. He’s a great kid on and off the floor and his abilities have been recognized by college coaches.”

He certainly has the resumé for 12th Region Player of the Year, and don’t be surprised if he receives that honor at the end of the season. 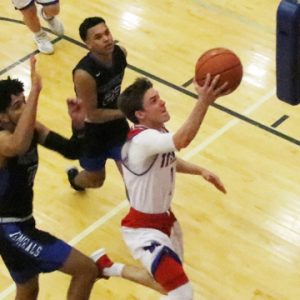 Carter Baughman drives to the rim against Danville for two points on Tuesday, Dec. 11. (Photo by Arpan Dixit) 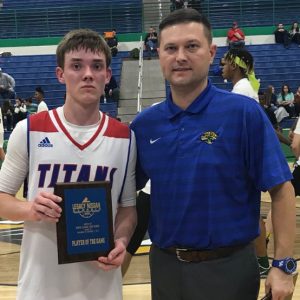 Baughman was named Player of the Game at the Nissan Classic on Friday, Nov. 30, against Sheldon Clark. (Photo Submitted) 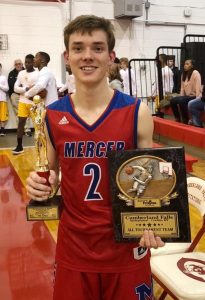 Baughman was named to the All-Tournament Team at the Cumberland Falls Invitational in Corbin, and also won the three-point contest. (Photo Submitted)