After suffering a two-game skid after a season-high seven-game winning streak, the Burgin Bulldogs (11-3) got back on the winning track in the 12th Region All “A” Tournament at Washington County High School on Monday, Jan. 14.

They defeated Danville Christian Academy (3-10) by a final score of 66-42, the third time the Bulldogs have defeated the Warriors this season.

Senior Matt Kirkpatrick added 13, while senior Ethan Kestler scored 12 to round out the double-digit scorers for the Bulldogs.

Head Coach Don Irvine was pleased with the performance of his team.

“We passed the ball really well tonight. We’ve been emphasizing that a lot in practice after our most recent losses,” said Irvine. “I also thought Wesley (Tyler) and Cameron (Hurst) did a great job on the boards, on the offensive and defensive end. We were holding them to one shot every time down the court. We just played aggressive tonight and that made all the difference in the world.”

The Bulldogs defeated DCA 73-31 back in late November. The second time was much different. Burgin defeated the Warriors 47-36 in mid-December before handling them with ease Monday night.

After eighth grader Hunter Reed completed an and-1 with just a few seconds remaining in the first half, the Bulldogs took a 42-23 lead into the locker room. Reed finished the game with three points.

Irvine said it was good to see Tyler crash the boards and play aggressive throughout the game.

“If he’ll (Tyler) start being consistent with that, it’ll really help us,” said Irvine. “He’s shown signs, and I thought tonight he gave us everything he had for however long he was out on the floor. That frees Cameron (Hurst) up to be more aggressive on the defensive end and not worry about the rebounds as much. I thought we did everything really well tonight. We’ve been waiting on that break out performance.”

Guard play was also big for the Bulldogs. Outside of Hurst, Kirkpatrick and Kestler have been difference makers this season and Irvine has taken notice.

“We’re starting to shoot the ball a little better now,” he said.

Kestler and Kirkpatrick made a combined five triples, with Kestler hitting four of them.

“They’re starting to understand the way we play. Matt (Kirkpatrick) is new to the system, so he’s just getting the understanding of how we do things. I just thought the last couple of games we’ve been a little passive. We didn’t really get up into people like the first of the year, and I think we disrupted things on the defensive end tonight. That’s as good as we’ve played all year,” said Irvine.

Junior Seth Martin and freshman Jackson Qualls finished with two points each to round out Burgin’s scoring.

The Bulldogs will be back on the court today, Thursday, Jan. 17, as they take on the host school, the Washington County Colonels, at 7:30 p.m., in the All-A semifinals.

Hurst did not play after suffering an ankle injury the prior game against Berea, and Irvine said that really hurt his team in terms of aggressiveness.

“Cameron did not play due to the ankle and we seemed to lose a lot of our aggression due to this,” he said. “We began concentrating on better ball movement for our next game.”

Tyler was the top scorer with 15 points, while also hauling in 13 rebounds for a double-double.

Kestler scored 14 while Reed chipped in 10 to round out the double-digit scorer for Burgin.

“We were very passive as a team, which made us ripe for an upset and that’s exactly what happened.” 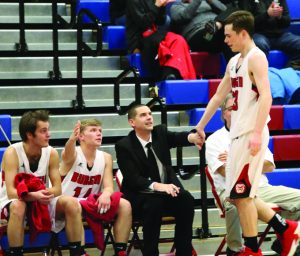 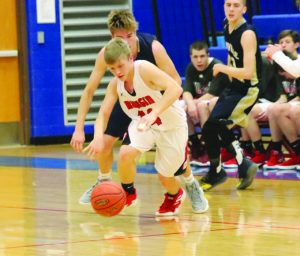 Senior Matt Kirkpatrick finds the loose ball and heads up court against DCA in the first round of the 12th Region All-A Tournament at Washington County High School on Monday, Jan. 14. 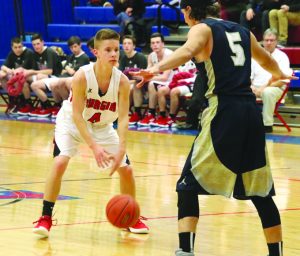 Sophomore Jackson Qualls stares down DCA’s Chris Mullen in Burgin’s 66-44 win over the Warriors in the first round of the 12th Region All-A Tournament at Washington County High School. 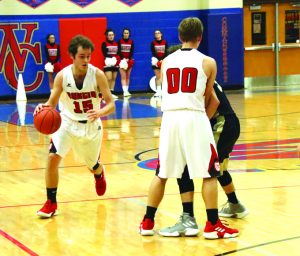 Senior Cameron Hurst (15) uses the screen set by eighth grader Hunter Reed (00) against Danville Christian Academy in the first round of the 12th Region All-A Tournament. 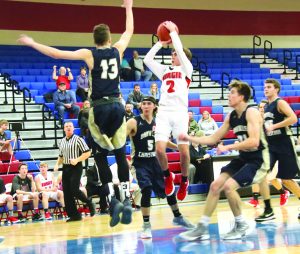 Senior Ethan Kestler (2) shoots a jumper in the paint over DCA’s Preston Carter (13). Kestler finished with 12 points (4 triples) in Burgin’s 66-42 win over the Warriors in the first round of the All-A Tournament. 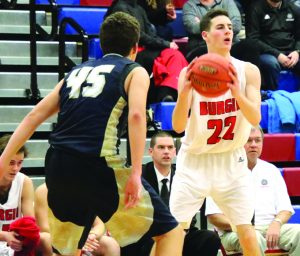 Junior Cole Mitchell holds the ball and looks for an open teammate against DCA in the first round of the 12th Region All-A Tournament at Washington County High School.