Losing is always tough, but the best teams always find a way to bounce back, and for the time being, the Mercer County Titans are in the midst of their best stretch of the season, winning five games in a row.

After going 2-1 and finishing fourth in the Cumberland Falls Invitational in Corbin from Dec. 27-29, the Titans (9-7) defeated East Jessamine, Louisville-Eastern and Western Hills to sit at 9-7 with just over 10 games left.

Here is a recap of their last three victories.

Senior Carter Baughman continues his stretch of stellar play. The floor general scored a game-high 29 points against the Wolverines (2-10), to go along with two rebounds, three assists and three steals. Baughman averages 22.3 points per game, good for 22nd in the state and is tied for 13th in the state with 3.4 made three-pointers per game. He is one of only eight players in the state with over 50 made threes. He  has 51 to be exact, and that number jumped to 56 after splashing five threes against the Wolverines.

“Carter (Baughman) has been working for this moment. He works tirelessly in the offseason to be able to make shots and free throws down the stretch,” said Head Coach Josh Hamlin. “We are very glad he is on our team.”

Along with Baughman, senior Isaiah Smith and Kaelin Drakeford all went a combined 6-for-6 from the charity stripe with less than two minutes to play to secure the victory. Smith’s two free throws gave the Titans a five-point lead after Western Hills made a late run. Baughman and Drakeford’s free throw followed Smith’s and helped the Titans close out the game.

Smith finished with only two points, but his two points were arguably the biggest in the ball game.

“We can thank the basketball gods for Isaiah’s (Smith) free throws after bouncing on the rim seven times before going in,” said Hamlin with a smile. “He’s been putting in the work, and if he gets his confidence to translate to the game like it does in practice, he’s going to be a real weapon for us because he is a really good shooter.”

The Titans held a 35-27 lead at the half and showed spurts that they were going to pull away, but Western Hills’ Cameron Laman’s big game prevented that. He scored a team-high 21 points and hit big shots when it looked like the Titans would make that closing run.

Peyton Cody sank a three to cut the lead to three with just 1:30 to play. Fortunately for the Titans, those were the last points for the Wolverines. Smith, Baughman and Drakeford’s free throws closed out the game and earned the Titans their ninth win of the season.

Junior Jamisen Lewis didn’t have a great scoring game by his standards, finishing with only three points but had three assists in the second half. Tatum finished with two triples and eight points overall and senior Luke Dean added eight points as well. Senior Jamason Sherrow played under 10 minutes, but was effective. He scored five points to go along with four rebounds, two of them coming on the offensive end.

The Titans advance to face Bourbon County in the second round of the 2A Classic. The game will be held at Mason County High School on Friday, Jan. 11, with tip-off set for 7:30 p.m.

The Titans (8-7) travelled to Adair County to take on Eastern (7-7) in the Lindsey Wilson College Classic on Saturday, Jan. 5, coming away with a 50-36 victory.

Baughman led the Titans with 24 points, Lewis scored 11 and Yeast added seven points to round out the top scorers for Mercer County.

Yeast also was the top rebounder for the Titans with nine.

Jacob Robinson and Trent Robinson were the top scorers for the Eagles with nine points each.

Lewis led the Titans with 19 points, to go along with three rebounds, three assists and four steals.

Baughman was in foul trouble throughout the game, but still managed to score 18 points.

Drakeford continues to flirt with triple-doubles. Against the Jaguars, the junior scored 10 points, hauled in eight rebounds, dished out six assists, had two steals and one block. Drakeford is a stat-sheet stuffer and Mercer County’s success and deep postseason run will depend on Drakeford’s playmaking ability.

The Titans held a 22-point lead, 55-33, at the end of the third and looked like they were heading to a comfortable victory, but East Jessamine made a run and cut the Titan lead to 63-55 with one minute to play. Baughman’s hustle earned the Titans another possession by forcing a jump ball with just under 30 seconds to play. Mercer County held on for their first district win of the season. 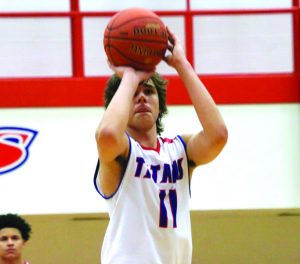 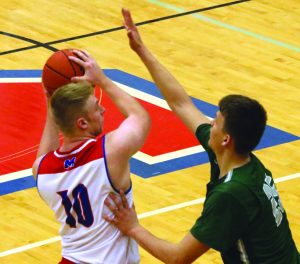 Mercer County senior Jamason Sherrow calls for help at the top of the key against Western Hills on Monday, Jan. 7. 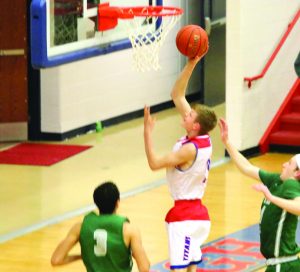