After going 2-1 in the Tim Short Auto Max Christmas Classic, the Lady Titans (9-5) have played three games, going 2-1 with wins over East Jessamine and Western Hills.

The Lady Titans have been playing without one of their top players, junior Channing Lewis. It’s hard to replace a player of her caliber on the floor. Before her hand injury, Lewis was averaging 16 points and eight rebounds per game. Lewis is expected to be back on the floor in a couple of weeks.

The Lady Titans handled the Lady Wolverines (3-10) with ease, cruising to a 71-44 victory in the first round of the 2A Classic.

Mercer County rebounded after a tough loss to Webster County in the Patriot Classic on Saturday, Jan. 5, at Lincoln County High School.

Senior Toni McCombs was the top scorer for Mercer County with 23 points, to go along with six assists, two rebounds and three steals.

Sophomore Camryn Preston scored 15 points, with 11 of them coming in the first quarter. Preston set the tone for the Lady Titans and they never looked back. She also had four rebounds and two steals.

Junior Calicia Smith had one of her best offensive games, scoring 10 points and led the team with six steals on the defensive end. Smith takes the assignment of guarding the opposing team’s best player and her hustle and tenacity on defense rubs off on her teammates.

Eighth grader Timberlynn Yeast, who is enjoying a breakout season in her first season of meaningful varsity minutes, scoring nine points, hauled in nine rebounds to go along with five steals.

“I was really frustrated after Saturday’s loss, but we’re playing good competition. I didn’t want them to feed off the loss against Webster County. I wanted them to come out and play aggressively” said Head Coach Hayley Spivey. “We didn’t play a great first half, but I thought we responded well in the second half with a lot of energy.”

Mercer County started the game on a 14-2 run due to their stifling full court press, which was able to force turnovers at mid-court. But the Lady Wolverines fought back with a 9-0 run of their own and only trailed 20-14 after one quarter. The Lady Titans took a 30-21 lead at the half.

The second half was when the Lady Titans turned it on and played their best basketball of the night. They went on a 21-2 run to take a 51-26 lead with just under four minutes left in the third.

Spivey’s crew never looked back from there.

Junior Zoë Yeast didn’t score, but impacted the game in other ways by hauling seven rebounds and adding one block.

“I think we realized we weren’t playing to our ability in the first half,” said Spivey. “I think they were just ready to go in the second half and they showed that.”

The Lady Titans will take on Harrison County in the second round of the 2A Classic at Mason County High School on Thursday, Jan. 10. Tip-off is TBD.

Preston was the top scorer with 12 points and also led the team in rebounds with seven. Timberlynn Yeast added seven points and Zoë Yeast scored six points to round out the top three scorers for the Lady Titans.

Karlie Keeney was the top scorer for Webster County with a game-high 23 points.

Mercer County cruised to earn their first district win of the season, defeating the Lady Jaguars (3-11) by a final score of 69-37.

Preston was the other Lady Titan in double-digits with 14 points to go with three rebounds and three steals.

“Losing Channing (Lewis) is a huge loss for us, but I told the team when she went down that it doesn’t mean that one person has to do what she does. Everybody can chip in different ways and we did that tonight,” said Spivey. “The biggest thing for me is that I’m hoping this transition we’re going through opens up the floor for everybody else so that when Channing does get back, she’s going to make our team that much better.”

Mercer County held a 41-12 lead at the half and never looked back. 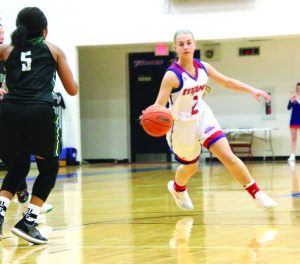 Mercer County sophomore Stevie Shephard (2) takes the hand off and drives to the basket against Western Hills on Monday, Jan. 7. 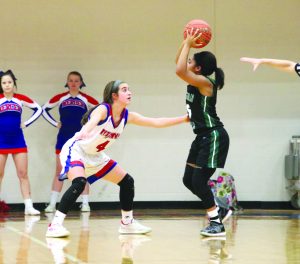 Mercer County eighth grader Anna Kate Drakeford (4) defends her opponent at the top of the key against Western Hills on Monday, Jan. 7. 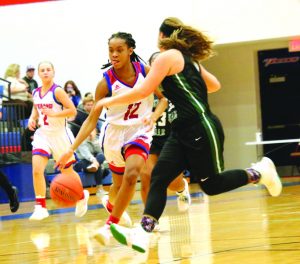