Here is a recap of their loss to Berea on and win over Rose Hill on Saturday, Jan. 5.

Junior Wesley Tyler started the game off hot, scoring eight of the first 14 points for the Bulldogs. He finished with 10 points, five rebounds and a game-high four blocks.

Senior Ethan Kestler was the top scorer for Burgin with 13 points to go along with two steals.

The Pirates led 30-22 at halftime, and they saw their lead shrink to three after Kestler’s big third quarter. He scored eight points in the period, including two triples, to keep the Bulldogs within striking distance, but the fourth quarter was a different story.

Berea started the fourth on a 13-2 run and the Bulldogs couldn’t recover.

“I felt yesterday that we weren’t prepared, and my worst fear has come true,” said Head Coach Don Irvine. “We were very lackadaisical in practice. We just weren’t mentally ready. I knew Berea was going to come in start out aggressive.”

Hurst’s injury left the Bulldogs reeling in the fourth quarter, and they weren’t able to recover.

“When you lose Cameron (Hurst) with his ankle, that takes the wind out of you,” said Irvine.

The Pirates ran the full court press all game and Burgin struggled throughout the game to defeat the trap.

“We went back to some of our old bad habits of missing free throws and turning the ball over,” said Irvine. “We didn’t pass the ball very sharply and that really hurt us. It was a little bit more pressure than we’re used to seeing.”

Freshman John Boursaw made good use of his minutes. He scored seven points and was pesky on the defensive end with two steals.

The Bulldogs were back in action after a two-week break to defeated the Rose Hill Christian Royals by a final score of 53-50.

Hurst led the Bulldogs in all categories. He scored 19 points, hauled in eight rebounds and dished out four assists.

Tyler scored 11 points and Reed added 10 points to round out the double-digit scoring for Burgin.

“We were trailing until late in the third quarter, were down six with two minutes to go,” said Irvine. “We were able to make plays and free throws down the stretch to secure the win. It was a gritty team victory.”

Kestler sank a three-pointer to tie the game at 50 and Jackson Qualls hit 1-of-2 free throws to give the Bulldogs a one-point lead on the following possession.

Kestler drew an offensive foul to regain possession, Reed got fouled and drained two free throws with six seconds left. Rose Hill missed a game-tying three at the end of the game to give the Bulldogs their 10th victory of the season.

Burgin will be back on the court on Saturday, Jan. 12, when they travel to Fairview to take on Bath County in the 16th Region All “A” Classic. Tip-off is set for 4:30 p.m. 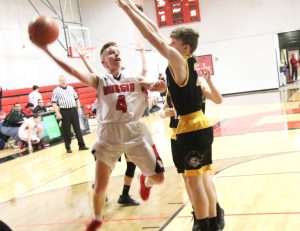 Jackson Qualls drives strong to the rim against Berea. 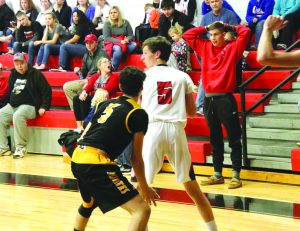 Evan May reads the defense and thinks about his next move. 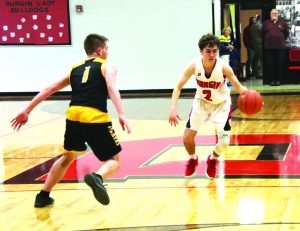 Ethan Kestler looks to drive by a Berea defender. 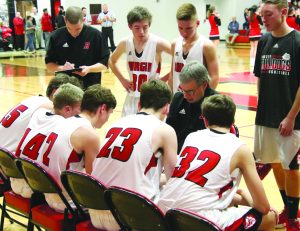 Head Coach Don Irvine talks to his team during a timeout.