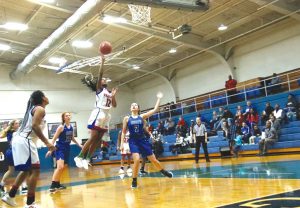 The Harrodsburg Herald/Arpan Dixit
Eighth grader Timberlynn Yeast slashes to the rim and soars for two of her 19 points against Scott on Thursday, Dec. 20. The Lady Titans def. Lady Eagles 69-68 in the Traditional Bank Holiday Classic at Lexington Catholic High School.

In past year, the Lady Titans have always played in tough tournaments over the holiday break. This year was no different. The defending state champs competed in the first two rounds of the Traditional Bank Holiday Classic at Lexington Catholic High School from Thursday, Dec. 20 to Saturday, Dec. 22.

They defeated Scott in the first round, and fell to Boyd County in the second round. Here is a recap of their first two rounds.

After escaping a nail-biter against Scott, the Lady Titans fell in an overtime clash against Boyd County by a final score of 72-69 early Saturday morning.

Senior Toni McCombs led the way for the Lady Titans with 17 points. Junior Channing Lewis notched a double-double with 14 points and a game-high 14 rebounds. Eighth grader Timberlynn Yeast was the last Lady Titans in double figures with 15 points. She also added seven rebounds.

“I’m really proud of my team. These are the games we want to be in right now,” said Head Coach Hayley Spivey. “We executed today and came up short, but it’s a good experience for the players to be put in situations like this.”

Despite the close loss, a game the Lady Titans could have won, Spivey was proud of the way her team competed.

“We competed really hard today and came up short against a very good Boyd County team,” she said. “We have some easy fixes we will work on, mainly free throw shooting, but we are right where we want to be, competing with some of the top teams in the state.”

The Lady Titans (4-1) trailed by as much as 12 points before making a furious comeback in the second half. They held on for a narrow 69-68 victory over the Scott Lady Eagles in the first round of the Traditional Bank Holiday Classic at Lexington Catholic High School.

Timberlynn Yeast was the top scorer for the Lady Titans with 19 points. She also added four rebounds and two assists.

Lewis, who is also averaging points in double figures, scored 14 points, to go along with five rebounds, four assists, three steals and one block.

Sophomore Camryn Preston was the last Lady Titan in double-digits with 10 points. She also grabbed two rebounds and had one steal.

Spivey was proud of the way her kids fought to pull this victory out against a tough opponent from the 10th Region.

“I had to challenge them at halftime because my upperclassmen didn’t have a very good first half,” she said. “I told them that was bad leadership. I challenged them and I think they responded with a much better second half.”

Mya Meredith was the top scorer for Scott with a game-high 32 points. Summer Secrist added 19 points for the Lady Eagles.

Eighth grader Anna Kate Drakeford was a huge factor in this game. She scored five points, hauled in two rebounds and dished out three helpers off the bench. She made key plays down the stretch and Spivey has seen her play translate from the JV level on to varsity.

“She was just so active out on the floor. We don’t win the game without her tonight,” said Spivey. “We talked to her last week about stepping up in big varsity minutes, and she’s been a different kid ever since. Different in practice, in freshman and JV games. Her play translated tonight.”

Sophomore Stevie Shephard scored six points, but they were all crucial. Shephard drove to the lane and completed an and-1 to give the Lady Titans the lead with three minutes left, which was a big swing of momentum at the time.

McCombs didn’t have her normal scoring night, but had six assists. The luxury of having a player like McCombs is if she’s not playing well offensively, she impacts the game in other ways. Against Scott, she played the role of facilitator and led the game in assists.

Junior Calicia Smith only scored two points, but had two steals and played solid defense on Secrist, one of the top scorers in the 10th region.

The Lady Titans will be back on the court Thursday, Dec. 27, in the Tim Short Auto Max Christmas Clash at MCSHS.