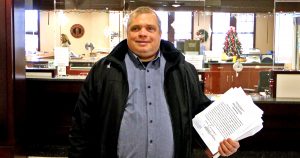 Burgin Mayor-elect Jim Caldwell was sworn in Wednesday after a judge dismissed a lawsuit filed by the City of Burgin attempting to halt his taking office. “Now that this matter is resolved, we can move forward,” Caldwell said.

Jim Caldwell was sworn in as the new mayor of Burgin on Wednesday, Dec. 26.

Caldwell was sworn in by Chief Circuit Judge Darren Peckler just moments after Peckler denied a request for an injunction to prevent Caldwell from taking office until a lawsuit had been settled.

According to a lawsuit filed by the City of Burgin, Caldwell violated a settlement with the City by running for mayor. The plaintiff was seeking $25,000 in damages and an injunction to prevent Caldwell from taking the oath of office until the matter was adjudicated.

After reviewing the arguments of both plaintiff and the defendant as well as the original contract between Caldwell and the City, Judge Peckler denied the request for an injunction as well as damages.

Peckler said an elected official was a in “completely different” situation from a paid employee.

“I find he is not employed by the city,” Peckler said. “He cannot be terminated.”

The city can appeal the ruling, but they must do so before the beginning of the year, when Caldwell officially takes office.

Burgin City Attorney Wanda McClure Dry had no comment after the hearing. Current Burgin Mayor George Hensley could not be reached.

Caldwell said the judge’s decision was a victory for the voters of Burgin.

“I govern the city, I’m not employed by the city,” said Caldwell. “I can only be fired by the people who elected me.”

Caldwell served as Burgin’s chief of police from September 1995 until January 2017, when he was fired by Mayor Hensley. Caldwell noted that the city council voted to exclude the $5,000 retainer paid to Matthew T. Lockaby of Lockaby PLLC in Lexington, who filed  the lawsuit, from the approved expenses at the last meeting.

The mayor-elect said the lawsuit had prevented him from making a smooth transition into office.

When Caldwell takes over at the first of the year, he will almost immediately have to hire a new water maintenance director, city clerk and treasurer. Every city employee except Burgin Policeman Casey Rucker has resigned.

In addition, the state government is withholding more than $112,000 in state road aid because of missing audits dating back to 2011.

With the lawsuit out of the way, Caldwell said he can start trying to right the ship.

“Now that this matter is resolved, we can move forward,” he said.