The loss might not have been the only thing on Head Coach Josh Hamlin’s mind after the game.

The Titans (2-5) dropped their third straight game, the third one coming against the Wayne County Cardinals (4-2) by a final score of 70-55.

Despite the loss, the Titans are worried about their senior leader and leading scorer, Carter Baughman.

Baughman drove hard in the lane late in the third quarter, was fouled and took a hard, awkward fall on the floor. He did not return and a timetable for his return is uncertain.

“Normally in those situations, there is two ways that it can go. It can go in the way that the team gets fired up and gains more energy, or it can go where it’s little bit of a let down and I think we had that,” said Hamlin. “I think we got out-competed there in the end. I thought for three quarters we battled a really good team.”

Hamlin talked about the early struggles for his team after seven games.

Baughman played only three quarters, but was the top scorer for Mercer County with 21 points.

He was unconscious in the first half. He hit his first five three pointers on his way to 19 first half points.

Junior Kaelin Drakeford, who is just now working his way back from injury, scored 10 points, to go along with seven rebounds and four assists in his third game.

Baughman exited the game with his team down 41-40 heading into the fourth quarter. After his exit, the Cardinals went on a 29-15 run to end the game.

Nathan Burks and Aubrey Weaver were the top scorers for the Cardinals with 19 points each. Thomas Spencer, Wayne County’s leading scorer at 17 points per game, hit his average against the Titans.

The Cardinals held a 15-10 lead after the first quarter, but the Titans held a 16-10 advantage in the second quarter to take a 26-20 lead at the half.

Senior Nathan Tatum hit two big threes late in the third quarter to give the Titans a 41-37 lead, but Nathan Burk’s three-pointer as time expired cut the Titan lead to one heading into the fourth. Tatum finished with 8 points.

“He (Nathan) came out tonight with some confidence and we changed some things up. We had been starting him, but we decided to bring him off the bench and let him see the game a little bit,” said Hamlin. “He responded well. He played well defensively and moved the ball really well. It’s one of those things where he just needs more confidence and our guys believe in him.”

Tatum is still making his way back from a year off, and people have forgotten about that, said Hamlin.

Junior Trey Price had one of his best games of the season. He scored seven points, hauled in seven rebounds and dished out three assists.

“He didn’t have a lot of confidence very early on when we got him last year. There are light-bulb moments that go off with him all the time. I don’t think Trey (Price) understands how good he can be. He can be a factor and tonight was a perfect example.”

Hamlin said Price reminds him of Alijah Mink, a member of the 2015 12th Region championship team.

“Very athletic, can shoot it a little bit, can handle the ball and finish around the rim,” said Hamlin. “He’s going to come into his role and we’ll be okay. We just have to keep fighting and keep working hard.”

The Titans will be back on the court today, Thursday, Dec. 20, when they host Lincoln County in the Clash of the Titans Tournament at 8:15 p.m. 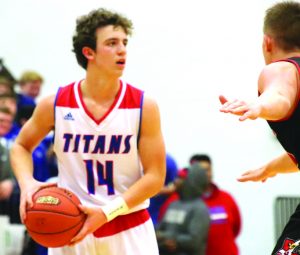 Mercer County junior Kaelin Drakeford (14) gets in a triple threat position at the top of the key against Wayne County on Monday, Dec. 17. 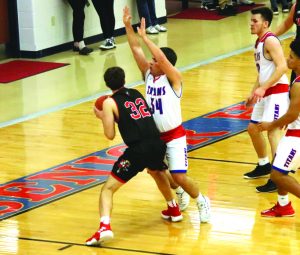 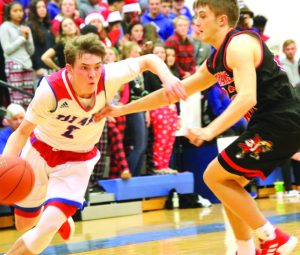