Senior Toni McCombs (with ball) is pictured with the game ball and with her Lady Titan teammates after scoring her 1,000th career high school point against Boyle County on Friday, Dec. 14. McCombs scored 11 points in Mercer County’s win over the Lady Rebels.

After a tough early season loss to Elizabethtown, a top 10 team in the state to start the season, the Lady Titans (4-1) have rattled off three wins in a row by an average margin of  24 points.

Here is a recap of their last two games against Wayne County (3-4) and Boyle County (1-3).

Senior Channing Lewis continued her stellar play to star the season. The junior tallied a game-high 22 points, to go along with five assists, six rebounds, two blocks and six steals in a 70-42 victory over the Lady Cardinals on Monday, Dec. 17.

Lewis is averaging 17 points, eight rebounds and close to four assists per game.

She scored Mercer County’s first 10 out of 12 points in the first quarter.

“I told them offensively that we really weren’t playing that bad, it was just on the offensive end where we’ve been struggling,” said Head Coach Hayley Spivey. “I challenged them at halftime and told them that this is a big region game, so we needed to come out with a lot of energy and I thought we did that in the second half.”

Sophomore Camryn Preston, who his averaging six points and three rebounds per game, had a big third quarter. She scored 10 of her 12 points in the second half, including six rebounds, two steals and one block. She was key in helping the Lady Titans build their lead in the second half and secure the win.

Spivey talked about defending Wayne County’s best player, Macey Blevins, who is averaging 17 points per game, was held to 13 points.

“We wanted to limit what she does while also neutralizing the others around her,” said Spivey. “We threw three or four different players at her to throw her off a little bit.”

Yeast has been a difference maker this season, averaging 14 points and a team-high 8 rebounds per game. She scored 10 points, hauled in five rebounds and also had two steals.

The best thing about this win for Spivey was that everyone contributed.

“They don’t have any fear. But look at who they’ve been playing against the last couple of years. They’ve been competing against Seygan Robins, Emmy Souder, Emma Davis, Faith Lake and Lexy Lake, who are all playing at the next level,” said Spivey. “If you had to play against them in practice everyday, then a game should be easy. Having that opportunity has really paid off for our team this season.

The Lady Titans pulled away in the second half by out-scoring the Lady Cardinals 19-8 in the third quarter, and 18-11 in the fourth.

The Lady Titans will be back on the court today, Thursday, Dec. 20, when they travel to take on Scott High School at 6 p.m., in the Traditional Bank Holiday Classic at Lexington Catholic High School.

The Lady Titans stay undefeated in 12th region play after a convincing 30-point win over the Boyle County Lady Rebels (1-3) on Friday, Dec. 14.

McCombs achieved a big milestone late in the first quarter when she scored her 1,000th point in high school competition. McCombs played her first two years at Knox Central High School before transferring to Mercer County her junior season. The crowd erupted as she laid the ball in off a fast break situation and etched her name into Lady Titan basketball history. She finished with 11 points.

Lewis was the top scorer with a team-high 17 points.

Following a Boyle County timeout in the third, Spivey addressed her team by saying “we aren’t playing for tonight, we’re playing for March.”

After the game, Spivey explained that the little things can amount to something very big.

“The biggest thing is we’re trying to do the little things correctly,” said Spivey. “I just told them that I know that we’re winning by 25 or 30, but we’re playing for March, so we’ve got to make sure we’re executing offensively, in the right spot on defense and just doing things the correct way.”

That message of execution and playing in March was heard louder than ever by underclassmen such as sophomore Stevie Shepherd, along with eighth graders Anna Kate Drakeford, Lindsay Jessie and Kallise Gammon.

The Lady Titans lead the whole game, and had a dominant 32-13 lead at halftime. The cushion the Lady Titans built allowed Spivey to get younger players a substantial amount of playing time.

It was a great opportunity to give important minutes to inexperienced players against a regional opponent, and they didn’t disappoint.

The Lady Titans scored more points in the fourth quarter (20) than any of the three previous quarters, but even more impressive, 12 of those points were scored by eighth graders; Timberlynn Yeast scored six points while Gammon and Drakeford each added three points each.

“It’s a region opponent so that’s always a big deal,” said Spivey. “It allows us to rest some people, we’ve been dealing with a few injuries here lately, and it gives our younger girls a chance to play, so hopefully come March I’m not afraid to throw them in there.”

Lewis, Timberlynn Yeast, and McCombs combined for 41 of the Titans 69 points, and the Lady Titans had seven different players make a three-pointer in the game. 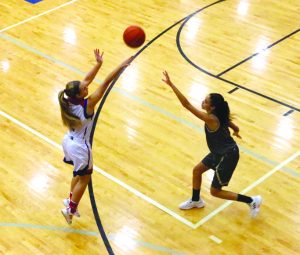 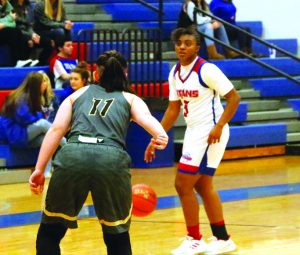 Mercer County senior Toni McCombs runs the offense at the top of the key against Boyle County on Friday, Dec. 14. 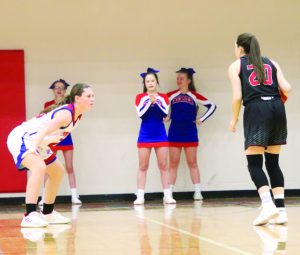