After searching for their first win two weeks into the season, the Burgin Lady Bulldogs earned that first win in a 58-39 win over Piarist School on Friday, Dec. 14, in the DCA Warriors Christmas Classic at The Roc in Harrodsburg.

Unfortunately, the Lady Bulldogs dropped their next two games to Mountain Mission (TN) and Covington Latin on Saturday, Dec. 15.

Seventh grader Baleigh Turner, along with freshman Grace Cocanougher and Ellie Jenkins were named to the All-Tournament Team.

Here is a recap of their games in the DCA Christmas classic.

The Lady Bulldogs (1-8)   dropped their last game in the DCA Christmas Classic late Saturday night against Covington Latin by a final score of 31-26.

Eighth grader Kaiden Lewis was the top scorer with six points to lead the Lady Bulldogs.

Turner and sophomore Hannah Stewart each drained one three-pointer each for Burgin.

Throughout the game, anytime Burgin would cut into the lead or make a run, Covington Latin responded by starting a run of their own.

After earning their first win of the season, the Lady Bulldogs dropped a tough game to Mountain Mission by a final score of 53-35 Saturday afternoon.

After Mountain Mission started out the gate on a 14-3 run midway through the first quarter, Jenkins and Stewart each hit a three-pointer to cut the lead to five.

The Lady Bulldogs trailed 32-16 at halftime, with Stewart leading Burgin with nine points.

“Their length, size and strength really bothered us,” said Head Coach Keith Monson. “We are really young but we’re getting there. The thing I was impressed was that team had a lot of speed. We faltered the first half and that was really the difference in the ball game.”

Burgin’s first win of the season came in dominating fashion. The Lady Bulldogs defeated Piarist School by a final score of 58-39 on Friday, Dec. 14.

Seventh grader Lauren Edwards led Burgin in scoring with 16 points, including nine rebounds. Lewis was the top rebounder with 13, while Gray added 12 boards.

“We were very excited. We played them (Piarist) pretty close in the first half,” said Monson. “But in the second half, we pulled away. We started making some shots and that was the difference. It was a full team win.”

Monson saw some very encouraging things from the win.

“Just the way we battled and played. We ran the floor and played as a team.”

The Lady Bulldogs will be back on the court Friday, Jan 4, when they travel to take on Kentucky Country Day at 6 p.m. 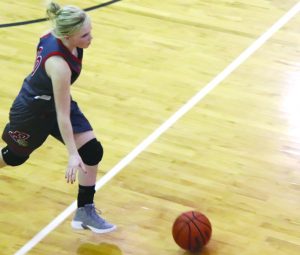 Burgin eighth grader Kaiden Lewis steals the ball and heads up the floor for a fast break opportunity against Mountain Mission on Saturday, Dec. 15. 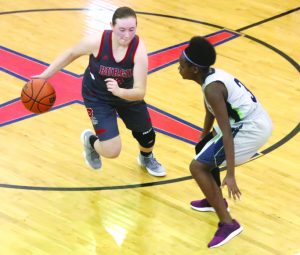 Burgin sophomore Hannah Stewart makes her move at the top of the key against Mountain Mission on Saturday, Dec. 15. 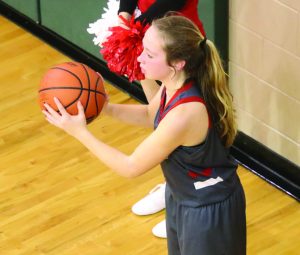 Burgin seventh grader Lauren Edwards looks for an open teammate from the baseline against Mountain Mission on Saturday, Dec. 15.