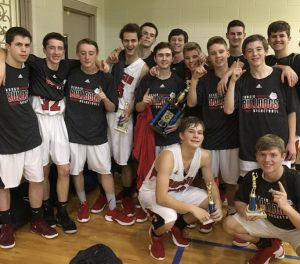 Burgin’s (7-1) strong start to the season continued over the weekend as they took home the DCA Warrior Christmas Classic title on Saturday, Dec. 15.

Here is a recap of their weekend.

In the final game of the DCA Warrior Christmas Classic, the Burgin Bulldogs defeated the Covington Latin Trojans by a final score of 58-20 Saturday night.

Reed was the top scorer for Burgin with 15 points. Hurst was the top rebounder with nine and senior Ethan Kestler had a game-high five assists.

“It’s the first tournament we have been in for many years outside the traditional All-A and district tournaments, so it was nice to be in a tournament format and be able to compete at a high level” said Head Coach Don Irvine. “We just emphasized improving our game as we do a lot, and the wins or losses are sometimes out of our control. We were of course excited to have won all our games, and represented our school and program well.”

Burgin followed up their grind-it-out victory against DCA with a dominating 56-37 victory over Evangel Christian early Saturday morning.

Hurst and Kirkpatrick were the top scorers for Burgin with 15 points each. Hurst also finished with game-high 11 rebounds.

Junior Wesley Tyler had a strong game, flirting with a double-double, with 13 points and nine rebounds.

Reed was a force on the defensive end, a big reason why he was named to the All-Tournament team on Saturday night.

He had a game-high four steals against Evangel.

After playing the Warriors less than two weeks ago, Burgin  faced a much different DCA team this time around. Despite the 47-36 victory on Friday, Dec. 14, the Bulldogs had their work cut out for them.

“They shut us down offensively for a good part of the game. They made adjustments from the first meeting,” said Irvine. “We came out very conservative. We didn’t shoot the ball hardly at all the first few minutes and that wasn’t by design. We were playing hard defensively, but just not offensively. The biggest thing I saw that we need to do going forward is come out a little more aggressive to start the game and also be stronger on the boards.”

The Bulldogs defeated the Warriors 73-31 in their first meeting in late November.

Hurst was the top scorer for Burgin with 20 points and was tied for the team lead in rebounds, 11 with Tyler.

“He (Hurst) missed a lot of shots he normally hits,” said Irvine. “But he really saved us on the glass with those 11 rebounds.”

Kestler had a quiet nine points, but had four assists and hit a couple big three-pointers in the second half to secure the win for Burgin.

Kirkpatrick has had a big impact in his first year playing basketball at Burgin, and Irvine talked about the difference he has made.

“He’s a guy who plays hard all the time and it’s rubbing off on everybody else,” said Irvine. “He brings a lot of energy to us.”

The Bulldogs will be back on the court Saturday, Jan. 5, when they host Rose Hill Christian at 2 p.m. 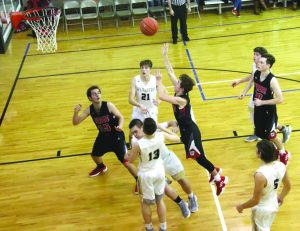 Burgin senior Ethan Kestler (shooting) floats a shot in the paint against DCA on Friday, Dec. 14, in the DCA Warrior Christmas Classic. 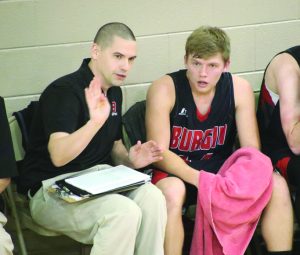 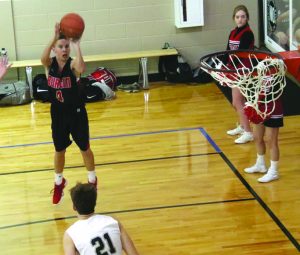