After dropping their first two games of the season against Sheldon Clark and Knott County Central, the Mercer County Titans (1-2) bounced back with two wins, most recently against the North Hardin Trojans by a final score of 63-53 on Friday, Dec. 7.

Senior Carter Baughman was the top scorer with 21 points, while adding five assists and four steals.

Junior Jamisen Lewis followed up his career-high 34 points against Garrard County with a 15-point performance against North Hardin.

The Titans boast one of the best backcourts in the 12th Region, but if they are going to make noise in March, it’s the other role players who will need to make a big impact.

Senior Luke Dean, along with juniors Trey Price and Bryson Yeast all had big games and they are a big piece to Mercer County’s success.

“Luke (Dean) is one of those kids that knows exactly what he’s supposed to do. He plays defense, he uses his length and he loves that corner three,” said Head Coach Josh Hamlin.

Dean only scored five points, but hit the biggest shot of the game, late in the fourth quarter with 2:11 to play. The Titans were up 55-51 with North Hardin cutting into their lead, but Dean’s triple propelled the Titans to a seven-point lead and a 8-2 run to end the game.

“In the NBA, they call that the three-and-D guy and that’s what Luke is for us,” said Hamlin. “The thing we like about him is that he doesn’t have a conscience. He hit that shot to put us up 10 and gave us some room to work and close out the game. I’m really happy for Luke. He’s a kid who has worked really hard to get where he is. He is a kid that brings a ton of energy to us and makes us a better ball club.”

Hamlin also talked about the impact Yeast and Price brought to the game. Yeast nearly earned a double-double, scoring nine points and grabbing nine rebounds. Price, before leaving with an injury in the second half, scored four points and hauled in seven rebounds, four of which were on the offensive end.

“We call them (Yeast and Price) the bash brothers. It’s a luxury to be able to bring two kids that athletic, that strong and that talented off our bench. The last three games they’ve played have been the best games they’ve played for this program, and that’s just a testament to those kids.” he said.

“He finally settled his nerves a little bit. His first varsity game was last Friday, and that was the biggest crowd he had ever played in front of and they keep getting bigger and bigger,” said Hamlin. “He was finally able to hit his first shot as a varsity player and that was just a huge relief for him. He’s going to be a really big piece off our bench  to help us going forward.”

Before Dean’s three, every time the Titans tried to pull away, North Hardin would claw their way back.

“When you got seven or eight kids who are playing their first varsity minutes early on in the year, we don’t know how to finish yet. We don’t know how to stay consistent yet,” said Hamlin. “That’s not a knock on our guys, it’s just one of those things that comes with more high stakes basketball.”

Hamlin said his team will be tested all year, as the Titans schedule doesn’t get any easier. He said his team plays that challenging schedule for a reason.

“Sometimes it’s frustrating, but it makes us learn, helps us when we get to March, play on the road and that’s kind of what we’re doing,” he said. “North Hardin did exactly what we scouted on them. It’s about our guys being able to find that gear where we got a team on the ropes and go ahead and knock them out. If we do, we should have some more wins coming.”

The Titans will be back on the court Friday, Dec. 14, when they travel to take on district rival West Jessamine. The Colts return one of the region’s top players, Dalton Bruner, so it will be a tough test for the Titans in a hostile environment. Tip off for that game is set for 7:30 p.m. 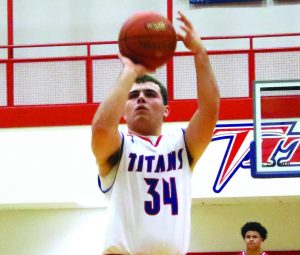 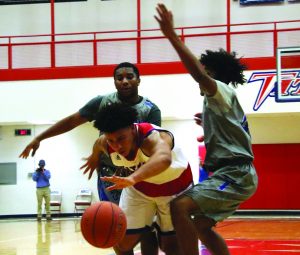 Mercer County junior Bryson Yeast (middle) hustles to get a ball going out of bounds against North Hardin on Friday, Dec. 7.