The Mercer County Lady Titans (1-1) have opened their season winning two out of their first three games. Here is a recap of their last two games against Elizabethtown and Danville.

A career game from eighth grader Timberlynn Yeast propelled the Lady Titans to their second victory of the season in a 93-79 victory of the Lady Admirals on Monday, Dec. 10.

Yeast scored a game-high and career-high 36 points while also grabbing a career-high in rebounds with 16.

“Timberlynn (Yeast) is such an athlete. She was just in attack mode from the very beginning,” said Head Coach Hayley Spivey. “And she was active defensively as well. For an eighth grader to have 36 and 16, it’s just unreal. She was all over the place and showed no fear.”

Although Yeast scored a game-high, she had plenty of help.

“We had a really good team win. We had three players in double-figures and about eight that contributed offensively and defensively,” said Spivey.

Junior Calicia Smith scored six points and sophomore Camryn Preston scored two to round out the scoring for Mercer County.

The Lady Titans are also playing without one of their senior leaders and scorers, Toni McCombs.

“When you have that many contribute, it’s hard to stop,” said Spivey. “All without my senior point guard Toni (McCombs) who wasn’t able to play due to injury. It just allowed others to step up and contribute effectively.”

Coach Spivey knew this was going to be a tough test for her Lady Titan (1-0) basketball team, but they responded by going down to the wire against the number sixth ranked team in the state, falling to the Elizabethtown Panthers (4-0) by a final score of 45-38 on Saturday, Dec. 8, in the Kentucky Premier Challenge at Mercer County Senior High School.

“I told them after the game there is no such thing as a good loss, but if there ever was one, it’s probably this one,” said Spivey. “We executed our game plan defensively exactly how we wanted, holding them to 45 points.”

Elizabethtown defeated number one ranked Mercy by 15 points two days prior to taking on the Lady Titans, and averaged 68 points per game coming in.

“That’s what we talked about all week. Staying between them and the basket. I mean, we played man-to-man the entire game so we didn’t change what we wanted to do going in,” said Spivey. “We struggled scoring and missed free throws, which is going to kill you at the end of games. We had a bad decision made by one of our players, but that’s just about keeping your cool and that’s a learning process, so it’s all a part of it. I thought we were really competitive against really good competition and I was happy with that.”

Smith received a technical foul with one minute left in the game, which gave Elizabethtown two free throws and the ball.

Despite the late technical foul, Smith arguably played one of her best games in a varsity uniform. She scored eight points, hauled in five rebounds and had two steals.

“We didn’t think that she (Yeast) had a great first half, she got into early foul trouble and didn’t look like herself in the first two quarters,” said Spivey. “We challenged her at halftime and I thought she really responded the second half. She is so active, aggressive and athletic so it’s plus having that on the floor.”

Spivey said nothing rattles Yeast, which is very impressive for someone who is in the eighth grade.

Both teams started off poorly on offense, only scoring a combined 21 points in the first quarter, with the Panthers leading 12-9.

Elizabethtown went on  a 14-2 run to the end the half, which left the Lady Titans in a tough spot heading into the locker room. Mercer County only scored two points in the second quarter.

“We have to find a way to score. We can’t go four or five minutes without scoring,” said Spivey. “We’re not going to win many games doing that. That’s the biggest thing. We have to be able to execute our offense and score when we need baskets. We have to find ways to make things work when it’s not going our way.”

Preston got a huge steal and lay in to cut the Etown lead to 35-34 with four minutes to play, but Etown closed the game on a 10-4 run to secure the early season victory in the Kentucky Premier Challenge.

The Lady Titans will be back on the court Friday, Dec. 14, when they host the Boyle County Lady Rebels at 7:30 p.m. 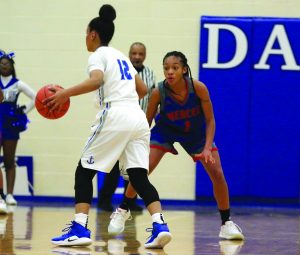 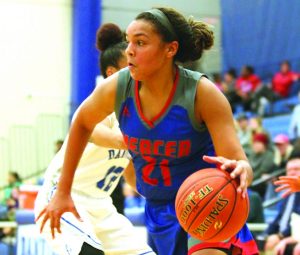 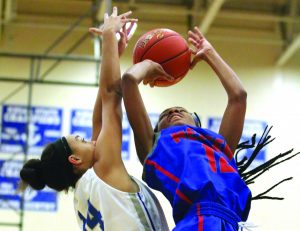