The Burgin Lady Bulldogs  (0-4) are still in search of their first win under their new head coach, Keith Monson.

Unfortunately, that search will continue as the Lady Bulldogs fell 45-28 to the Frederick Fraize Lady Aces  (1-5) on Saturday, Dec. 8.

The game was much closer than the score indicated, as the Lady Aces were able to pull away late due to fouling and sinking free throws.

One positive for Burgin was that junior Julia Holton returned to the court for her first action of the season. She missed the first few games due to a foot injury and Monson was glad to have one of his leaders back on the court and in practice.

“She was released on Friday and having her back in there was a big help,” said Monson. “She didn’t play a lot of minutes tonight, but her minutes will increase as the games go on. She will be big for us down the stretch.”

“She’s (Edwards) just a hustler. She’s five feet tall with a six foot heart,” said Monson. “It’s such a help with us having other scoring options in Kaiden (Lewis) and Baleigh (Turner) since we are a very young team. They are very athletic and once they learn the game, they will be fine. I am very encouraged.”

Frederick Fraize led 18-8 after one quarter of play, and held that 10-point lead at halftime.

Lindsay Thurman led the Lady Aces in scoring with 12 points, while Jenna Nottingham was second with 11 points.

Frederick Fraize pulled away late after Burgin cut the lead to under 10 points by hitting their free throws, something Monson wants his team to work on.

“We just have to improve our rebounding and free throw shooting because those are our two biggest weaknesses,” he said. “Everything is correctable and that’s what I told them after the game.”

The Lady Bulldogs will be back on the court during the DCA Warrior Christmas Classic, as they take on the Piarist School on Friday, Dec. 14, at 7:30 p.m. at the ROC in Harrodsburg. 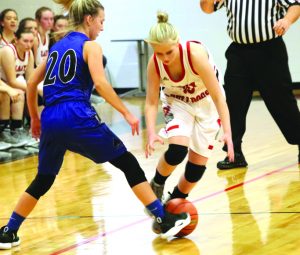 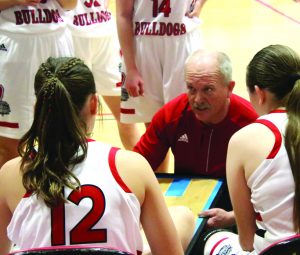 Burgin Lady Bulldogs Head Coach Keith Monson (in red) talks to his team during a timeout against Frederick Fraize on Saturday, Dec. 8.