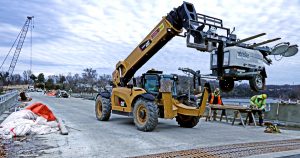 Commuters and businesses along Herrington Lake are getting an early Christmas present. The replacement for the Kennedy Mill Bridge will be open to traffic on Friday, Dec. 21.

Commuters and businesses along Herrington Lake are getting an early Christmas present this year.

The replacement for the Kennedy Mill Bridge will be open by the end of the day on Friday, Dec. 21.

The original contracted completion date was November 2019, but the contractor and the Kentucky Transportation Cabinet came to an agreement with Walsh in October to accelerate construction.

“They really stepped up to the plate,” Dedman said.

No grand opening ceremony has been announced, but Dedman said the county was looking into doing something on Dec. 21.

The project to replace the bridge was originally budgeted at $20.28 million while the date for the completion of construction was repeatedly pushed back, from April 2016 to January 2017 and finally to November 2019.

The contract amount grew to $31.7-million, including change orders and a $1.5-million early completion incentive, according to Natasha F. Lacy, a public information officer for the Kentucky Transportation Cabinet Department of Highways.

Lacey said the new bridge will be known as the Kennedy Mill Bridge, just like its predecessor.

The local marinas can look forward to a merrier summer season than the last several years. The former bridge, which is nearly a century old, was closed to traffic at least seven times since it was built and four times since 2003. In 2015, it was shut down a week before Labor Day. The bridge, which was nearly a century old and predated the creation of the lake, was finally closed for good in April of this year.

Marinas have also had to deal with construction headaches. Right before Memorial Day, many Mercer County boat ramps were closed because the lake’s water level was lowered for construction work.

Despite some setbacks caused by the weather—in June, torrential downpours forced Walsh to stop work on the pier on the Mercer County side—Buch said the contractor was able to get ahead of their original schedule.

“The team’s been doing a really good job,” he said. “We were originally thinking we would be done by Memorial Day.”

Even though the bridge is nearly ready, Buch warned it is still not open to local traffic.

No other construction project in Mercer County has been followed as closely as the construction of the new bridge. People have been sharing updates on the project on social media.

“We thank the community for their patience,” Buch said.