Below is a recap of their last games.

Senior Cameron Hurst continues his hot start to the season, scoring a game-high 22 points, 19 in the first half, while also grabbing 10 rebounds.

Senior Ethan Kestler and sophomore Jackson Qualls were the top facilitators with four assists each.

Hurst is averaging 27 points and 7.5 rebounds per game this season to lead the Bulldogs.

Outside of Hurst, junior Wesley Tyler had a strong game, mainly in the second half.

Tyler scored 10 of his 16 points in the third quarter, and made big plays when the Bulldogs needed them most.

“Well he (Tyler) has a little trouble getting asserted, but once he starts figuring out he can go over and around people, he’s a pretty good force for us in that paint. We ran our offense so we can feed him the basketball close to the basket,” said Head Coach Don Irvine. “Cameron (Hurst) was big for us in the first half, but he needed a little help and Wesley (Tyler) was able to provide that. He really had a good effort for us.”

But it was the defense that propelled the Bulldogs to their fourth victory of the season.

“We were a little stagnant in our half-court offense, but we were able to get a couple of easy buckets with those turnovers,” said Irvine. “We left a ton of points on the free throw line and we are a better team than that. If we hit our percentage like we should, we would have had a pretty big point total.”

Junior Matt Kirkpatrick provided a big spark, moving into the starting rotation. He scored eight points and had a couple big steals in the game.

“He plays hard. He always gives us a good effort, we just have to get him shooting the ball just a little bitter,” said Irvine. “But with it being his first year of high school basketball, it’s hard to get into the speed of the game and develop consistency. I think he’s getting better every game and that’s what you want out of him.”

The Bulldogs dropped their first game of the season in a close affair, 63-60 against the Walden Wolverines on Tuesday, Dec. 4.

Tyler was the top scorer with 20 points, while Hurst led Burgin in rebounding with 10.

The Bulldogs will be back on the court on Friday, Dec. 14, when they take on Danville Christian Academy in the DCA Warrior Christmas Classic at the ROC in Harrodsburg. Tip off is set for 5 p.m. 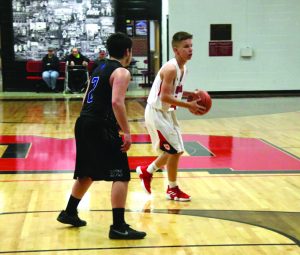 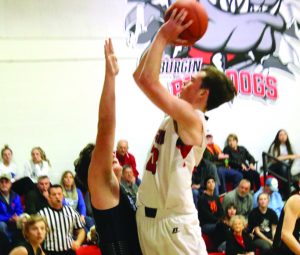 Burgin junior Wesley Tyler (right) elevates and shoots over a defender in Burgin’s win over Frederick Fraize on Saturday, Dec. 8. 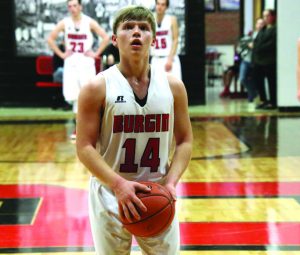 Burgin junior Matt Kirkpatrick stares down the basket before his free throw against Frederick Fraize on Saturday, Dec. 8.