It’s been an up-and-down season so far for the Mercer County Titans basketball team (2-2) after their four games, and they took another hit Tuesday night in a close 57-49 loss to the Danville Admirals (4-0).

Despite the loss, the Titans got one of their best players back from injury. Junior Kaelin Drakeford, who was injured during the last part of football season, returned and made an immediate impact. He finished with five points and seven rebounds.

“Kaelin (Drakeford) has been working so hard to get back on the court, you know, suffering through a lingering injury. We probably played him a little too much tonight, but he’s competitor and didn’t want to come out,” said Head Coach Josh Hamlin. “We kind of left that up to him. But we’re going to be smart on the court with him. He’s one of the guys we’re going to really depend on a lot this year so it was encouraging to see him back out there. I know he’s frustrated because he’s not happy with his performance, but I know once he gets his legs back under him and gets in shape, he’ll be the Kaelin that we thought he was going to be.”

Danville’s size and length frustrated the Titans and Hamlin gave credit where credit is due.

“Give a ton of credit to Coach Ed McKinney. They played good defense tonight. You know, just off the top of my head, I can think of 7-10 shots that we missed that normally go in,” said Hamlin. “It might have had a little bit to do with their length. We didn’t play well offensively and I think that is a credit to Danville.”

The Titans were led in scoring by senior Carter Baughman. He has had an impressive season so far, averaging 26.6 points per game. There was a point in the second half where the Titans were down by eight, but Baughman scored four quick points to get his team back in the game. Unfortunately, Danville was able to withstand the run and hit free throws down the stretch to ice the game.

Free throw shooting was not a strong suite for the Titans, missing 14 shots from the line, and Hamlin knows his team is better at the line than what they showcased against the Admirals on Tuesday night.

“Inexcusable on our part to miss 14 free throws. We’re a good shooting team for the most part, especially from the free throw line, but that ‘s something we’re going to address in practice,” said Hamlin. “It’s the second region game we’ve played, it’s still early and our guys are still trying to work in some pieces to the puzzle. It’s hard and that’s a good thing because you got kids who can play. It’s a learning process for us, we’re not used to losing this much, but one thing I will say is I think we had four or five losses last year where our chemistry was kind of teetering, but this year we have some guys calling themselves out. That is a sign of growth and when those things happen, you have to like the maturation and we’re headed in the right direction.”

The Admirals had three players in double-figures. Deshaud St. Martin and Zach Thornton led Danville with 15 points each, while Dante Hayden added 12.

“I thought Deshaud (St. Martin) played well for them. He did a really good job on the glass,” said Hamlin. “We just didn’t make enough winning plays.

Baughman was the only Titan in double-digits. Junior Jamisen Lewis was second on the team with six points.

Darrian Bell scored eight points, but did a lot of things that didn’t show up on the stat sheet.

“You know, Darrian Bell, we’re a big fan of his,” said Hamlin. “The kid battles his tail off. He plays basketball the way it’s supposed to be played for an undersized big. He’s one of those guys that if I had a vote right now for All-Region, Darrian Bell is going to be on my All-Region team.”

The Titans trailed by five at the end of the third quarter, and the fourth quarters was an entertaining back-and-forth affair. After Baughman completed an and-1, the Titans trailed by two, but the Admirals ended the game on a 8-2 to secure the early season region victory.

The Titans will be back on the court Friday, Dec. 14, when they travel to take on rival West Jessamine at 7:30 p.m.

The Colts are lead by top returning senior, Dalton Bruner, who is averaging 21.3 points per game so far this season. 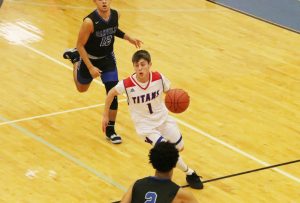 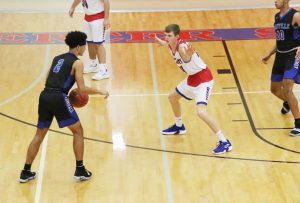 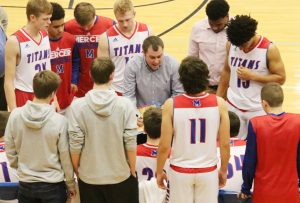 Titans Head Coach Josh Hamlin (middle) talks to his team during a timeout against Danville.