The Mercer County Lady Titans began their state title defense on Monday, Dec. 1, in a 63-42 victory over the Somerset Lady Jumpers.

Three Lady Titans were in double figures, but Spivey also got quality minutes from the underclassmen on the roster.

“I really challenged them at halftime and I just told them they needed to play with a lot more energy,” said Spivey. “I felt like we didn’t come out with great energy in the first half so I challenged them. I told them to make a statement coming out of the half and I felt like they responded well to that. To have an eighth grader, freshman and a sophomore really help elevate our team in the second half is going to be so beneficial for us in the future.”

Freshman Love Mays got things started for the Lady Titans, scoring the first five points of the game. Mays finished with five points and had five rebounds. Somerset was able to get stops in the first half and cut the double-digit Mercer County lead to just 28-24 at halftime.

Ashley Holt and Rachel Presley led Somerset in scoring with nine points each.

“I think it was their zone defense. When any team runs a zone, it slows the game down. It makes you a little sluggish. We had talked about it in practice this week, watched film on them and we talked about being active and moving the ball quickly,” said Spivey. “I felt like we really weren’t doing that. We were playing into their pace. I just told them to play their game in the second half and they did. Don’t let them dictate how you play.”

The second half was a much different story. Preston and Lewis both drained triples to start the third quarter and the Lady Titans never looked back. Preston scored eight of her 13 points in the third quarter to help build Mercer County’s lead.

Somerset took a timeout with five minutes left in the game, down 53-33, but that didn’t stop Mercer County’s momentum.

Eighth grader Timberlynn Yeast was another underclassmen that made a big impact. She scored five points, and was tied for the team lead in rebounds with nine.

Junior Calicia Smith gave solid minutes when out on the floor. She scored four points and had a game-high four steals.

Spivey talked about the improvement she would like to see heading into a tough matchup this weekend.

“The biggest thing is we have to rebound the basketball. We have to rebound and that’s the bottom line,” said Spivey. “We just have to make sure that we have that energy from the moment that ball tips until the last buzzer goes off. We have to have energy for 32 minutes to keep our tempo up and be ready to go.”

The Lady Titans will be back on the court Saturday, Dec. 8, when they host Elizabethtown in the Kentucky Premier Challenge at 8 p.m. 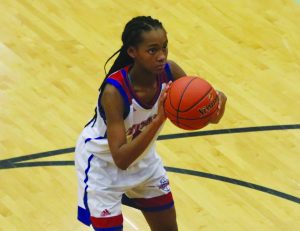 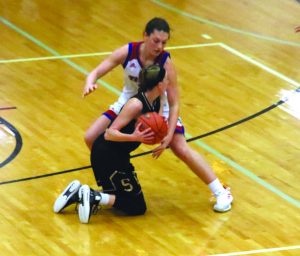 Sophomore Camryn Preston traps Somerset’s Ashley Holt near the top of the arc in Mercer County’s 63-42 win over the Lady Jumpers on Monday, Dec. 3. 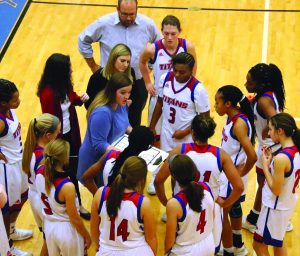 Mercer County Lady Titans Head Coach Hayley Spivey (in blue) talks to her team during a timeout in the second half against Somerset on Monday, Dec. 3.