It’s been a rough start to the 2018-2019 season for the Mercer County Titans boys basketball team, but they earned a much-needed first win of the season against Garrard County on Monday, Dec. 3, by a final score of 80-78 in overtime.

The Titans have been without one of their top players for the first three games, junior Kaelin Drakeford. He will be back with the team this week.

Junior Jamisen Lewis led the Titans in scoring with 34 points, while senior Carter Baughman added 27 points in the second half, going 5-for-7 from beyond the arc.

“Jamisen (Lewis) scored 34, Carter (Baughman) added 28 points in the second half after not scoring in the first, Trey (Price) added 10 rebounds,” said Head Coach Josh Hamlin. “It was a total team win. We had a lot of things go against us. Adversity hit early and often, but our guys kept pushing and came out with a nice win. When you are missing a starter like we are with Kaelin (Drakeford) being out, these early season tests allow for other players to step up to earn minutes that will really help us going forward.”

Coming off a tough loss against Sheldon Clark, the Titans were looking for a bounce-back victory over the Patriots. Unfortunately, Knott County Central came away with a 87-72 win in overtime over the Titans on Saturday, Dec. 1, at Whitley County High School in Williamsburg.

“They are favored in the 14th region. They returned six players off of last year’s team that got significant minutes,” said Hamlin. “We had opportunites to win the game in regulation, but couldn’t get our final shot to fall. In overtime, they shot 17 free throws and that is just hard to overcome. Our kids battled to the very end which was very encouraging.”

The Titans started their season against Sheldon Clark on Friday, Nov. 30, in the Nissan Classic at North Laurel High School in London.

Unfortunately, the Titans were handed their first loss of the season.

Trey James of Sheldon Clark, a former Mercer County student-athlete, led his team in scoring with 21 points and hauled in 18 rebounds. Baughman did everything he could to keep Mercer County in the game, scoring a game-high 27 points. Lewis added 12 points.

“It was a first game for a lot of our kids. Even though we had two scrimmages against good competition, it was hard to get into the flow of the first game,” said Hamlin. “We missed some easy looks and didn’t capitalize on some opportunities that were there for the taking. It was a good learning experience for our young team.”

The Titans will be back on the court Friday, Dec. 7, when they host North Hardin for their home opener at 7:30 p.m. 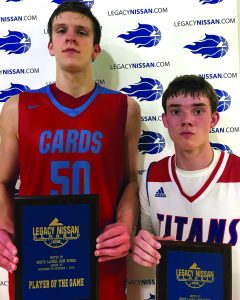 Carter Baughman (right) and Trey James were named Players of the Game in the matchup between Mercer County and Sheldon Clark on Friday, Nov. 30, in the Nissan Classic at North Laurel High School. 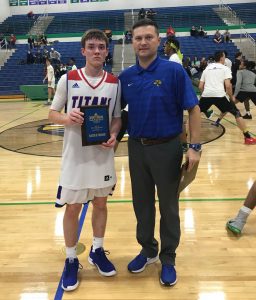