The Burgin Bulldogs have started the 2018-2019 season with three straight wins against Danville Christian Academy, Christian Fellowship and Lee County.

Below is a of recap the first three games of the season for the Bulldogs.

Burgin travelled to take on the Bobcats over the weekend and came away with a close 81-75 victory.

Senior Cameron Hurst had a game-high 36 points for Burgin, who led the majority of the game.

Lee County made it interesting by scoring 29 points in the fourth quarter, but Burgin was able to build a strong cushion early to hold off the run.

Trenton Combs led the Bobcats in scoring with 30 points.

Eighth grader Hunter Reed was second on the team in scoring with 11 points off the bench.

The Bulldogs were 3-for-9 from behind the arc and 18-for-42 from the free throw line.

After the Eagles started the game on an 8-0 run, the Bulldogs staged a comeback and were able to pull away late to win 56-43.

Hurst was the top player, finishing with a double-double of 22 points and 11 rebounds.

Kestler was the other Bulldog in double figures with 11 points.

“I think it’s the best defensive game we’ve played here in two years. We were really aggressive,” said Head Coach Don Irvine. “The defense really saved us. If we don’t have that, we don’t come back out of that hole because our offense was nowhere to be found tonight.”

The Bulldogs struggled shooting, but the defensive intensity and the ability to force turnovers was the deciding factor in the game.

Junior Matt Kirkpatrick, who is in his first season with Burgin basketball, made a big impact off the bench at the point. He played aggressive defense, deflected loose balls and forced turnovers that led to points on the other end.

“On offense, he’s still trying to find his way because the game is so fast for him right now,” said Irvine. “He’s got every opportunity to improve as we go on and I think he will. He gives us a good day’s work and it’s infectious on everybody else.”

Burgin was able to match Christian Fellowship’s intensity and won the 50-50 balls late in the game. Hurst scored 13 points in the final period to secure the win. Sophomore Jackson Qualls stepped up to the charity stripe to hit two big free throws as the Eagles were trying to make a late push. Those were his only two points of the game, but they were the biggest points up to that point in the game.

Burgin opened their season on Tuesday, Nov. 27,  with a dominating 73-31 victory over the Danville Christian Academy Warriors.

Hurst dominated the game from start to finish, scoring a game-high 28 points.

“I thought the first quarter was as good as we could play coming out,” said Head Coach Don Irvine. “We shut them down pretty well defensively, we were aggressive offensively and we crashed the boards. We hit some shots that makes us look good when they go in. I want to give DCA a lot of credit because they played hard the whole time. It seemed liked they were a little shell-shocked with it being their first game, but I think they got better as the game went on and I think they will get better as the season goes on.”

The Bulldogs scored the first six points of the game and held a 27-6 lead after the first quarter, with Hurst scoring 15 of those 27. He asserted his dominance in the paint, from mid-range and at the foul line.

Tyler also had a big first half, scoring 10 points, including two three-pointers. He finished with 11 points.

Burgin’s third leading scorer was Kestler. He scored nine points and went 4-for-4 from the charity stripe.

The Bulldogs led 40-13 at the half, and outside of the Big 3 (Hurst, Kestler and Tyler), contributions were made from up and down the lineup. Juniors Hunter and Seth Martin each scored two points in the first half, with the latter making key defensive plays which led to points on the other end. Seth finished with two points, while Hunter finished with five points.

Jackson Qualls scored four points, two in each half. Qualls is responsible for the little things that do not show up on the stat sheet. Irvine has always referred to Qualls with the highest regard and his heart and hustle rubs off on his teammates.

“I just think our younger guys are more confident and more assertive,” said Irvine. “We’ve really been working with them on believing in themselves. I think you’re starting to see a little more maturity. I believe as they continue to mature and get a little older, they will continue to see development.”

The second half was much of the same for Burgin. Hurst took over, and the rest of his teammates followed his lead. The Bulldogs outscored the Warriors 33-17 in the second half.

Freshman John Boursaw came off the bench and contributed three points, as did sophomore Levi Hale. Reed, who Irvine said has a bright future ahead of him, contributed five points, including a rainbow from beyond the arc.

The Bulldogs will be back on the court Saturday, Dec. 8, as they travel to take on the Walden Wolverines at 7:30 p.m. 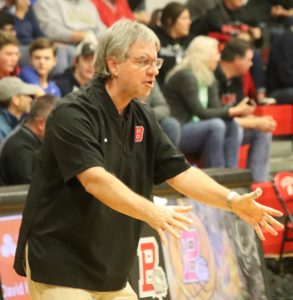 Head Coach Don Irvine instructs his team out of a timeout against Christian Fellowship on Friday, Nov. 30. 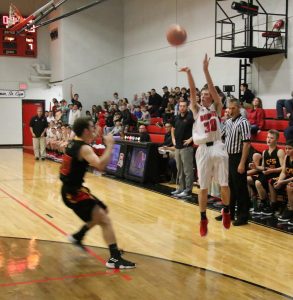 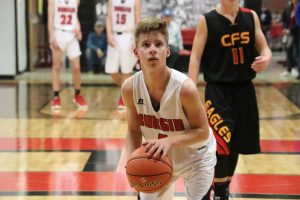