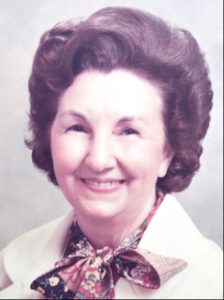 It is with sadness that the family of Martha Kirkland Davis announces her passing after a long and wonderful life, on Friday, Nov. 30, 2018, at the age of 101 years.

Martha was born on Sept. 13, 1917, to Alexander and Minnie Devine Kirkland in Rose Hill, KY. She was the middle sister in the family, and became wise beyond her years after her mother passed away in 1930.

For nearly 55, Martha lived on Beaumont Avenue in Harrodsburg. A member of the greatest generation, Martha’s husband and brothers all served in WWII, and Martha gave birth to twin daughters in Denver, CO, during the war. In 1945, Martha and Hugh returned to Richmond, KY to raise their girls.

In the 1950s, Martha became an entrepreneur. She opened the Davis Beauty Salon in Richmond in 1956 and then moved her business to Harrodsburg in 1969. Over the years, she employed dozens of stylists. A stylist through the days of the Bouffant, poodle cut, beehive, bob, and pixies, Martha was always in the know. Three chairs, four dryers, and more tales than the weekly Herald could ever hold. Marriages, broken hearts, new babies, deaths, Kentucky basketball, illnesses, through good times and bad, Martha’s shop served both to beautify and counsel.

There are more than a few families in Mercer County that hang pictures of mothers and grandmothers looking sharp because of the work done in Martha’s shop.

Martha had a wonderful social life that centered around her love of bridge. Several times a week, her bridge club gathered for lunch and afternoon games. She and her friends would often be at the Stone Manor Restaurant. In the winters, she traveled with her bridge club to Naples, FL. Martha never remarried after her husband passed away in 1971.

Only a centenarian would be predeceased by nearly all of her closest family and immediate friends including her husband, Hugh Leonard Davis, her brothers, Thomas (Ruby) Kirkland and Robert Kirkland, and her sisters, Elise (Edwin) Freeman and Flossie (Frank) Carpenter.

Martha was a life long member of the Harrodsburg United Methodist Church and believed that goodness, honesty, and kindness to our fellow man would lead to heaven.

Funeral services were held on Tuesday, Dec. 4, at the Ransdell Funeral Chapel with Allen Gibson officiating. Burial was in the Spring Hill Cemetery.

Honorary pallbearers were the Doris Davis Circle of HUMC.