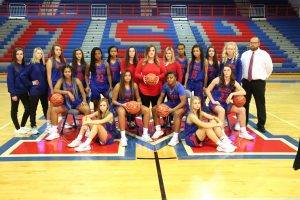 All five starters for the Lady Titans have graduated and are now playing basketball at the college level.

Replacing players like Seygan Robins, Emmy Souder, Emma Davis, Faith Lake and Lexy Lake is near impossible. Those five seniors left a mark on the program that will live on forever, but new Head Coach Hayley Spivey is excited for the new-look team with a few returning starters.

“It’s honestly been a little overwhelming, but it’s going really well so far. We’ve had a really good preseason and conditioning,” said Spivey. “We played our first scrimmage last week and I saw some things we needed to work on, but the  girls are buying in, working hard and just preparing for the season.”

Spivey said you can’t replace what those five seniors brought to the program, but she is ready to coach the next wave of talent at Mercer County.

The Lady Titans have 13 players on their roster, consisting of two seniors, three juniors, two sophomores, one freshman and five eighth graders.

Toni McCombs, who was a key member of the state championship team last season off the bench, will be a key part of Mercer County’s success this season. She averaged six points and two rebounds last season, but look for those numbers to increase this winter. McCombs has the ability to handle the ball, get to the basket and also pull up for a jump shot if needed. She is a versatile player who can score in bunches.

“She’s very quiet, but she leads by example and she’s starting to get more vocal,” said Spivey.

Mackenzie Burns is the other senior on the roster. Burns has been with the program throughout her high school career, but hasn’t been able to play due to a head injury. Spivey said Burns is excited for her return as well as her teammates.

“This is going to be her first year back playing and it’s been really good for her. She’s doing really well managing being off for three years and coming back. We have a really good group of girls and two really good seniors that lead by example.”

Channing Lewis, Calicia Smith and Zoë Yeast round out the junior class for the Lady Titans. Lewis, though only a junior, has seen a lot of varsity time in her career as a Lady Titan. She averaged two points and three rebounds last season, but those numbers will increase substantially this season.

“She’s been a really crucial part of our team for the last couple of seasons,” said Spivey. “Just having that experience coming back is big for us after all that we lost from last year.”

Smith and Yeast provide strength and hustle all over the court and Spivey expects them to be ready when called upon.

“Calicia (Smith) and Zoë (Yeast) will be a big part of our team this year,” said Spivey.

Camryn Preston and Stevie Shephard are the two sophomores on the Lady Titans squad. Preston and Shephard didn’t see a lot of time last season due to youth, but Spivey said they will be crucial this season. Preston can play the point, handle the ball and rebound while Shephard is a knock down shooter. If left open, she will make the opponent pay for it.

Love Mays is the only freshman on the roster. Mays played varsity basketball last year, and like Preston and Shephard, is expected to challenge for a spot in the rotation. Mays can also play the point, shoot and plays stifling defense.

The youth in the Mercer County Lady Titans basketball program has been dominant. Anna Kate Drakeford, Timberlynn Yeast, Jersey McGinnis, Kallise Gammon and Lindsay Jessie are coming off back-to-back seventh and eighth grade state championships. Although Drakeford and Yeast were the only two members on the varsity team from last season, the remaining three eighth graders are a big part of Mercer County’s future.

“We have a really special eighth grade group. They’ve been successful the past several years in middle school,” said Spivey. “They (Drakeford and Yeast) are two really special players, but they also have six or seven more out of that group that will come a long way by the time they get into high school.”

After Lewis and McCombs, who Spivey said are proven starters, the remaining underclassmen will be battling for spots at the beginning of the season.

The Lady Titans will be playing in three different tournaments this year.

They will host the Kentucky Premier Challenge on Saturday, Dec. 8. They will travel to Lexington Catholic for the Traditional Bank Holiday Classic in late December. They will be hosting the Titan Christmas Clash beginning two days after Christmas.

The Lady Titans will also be hosting the 2A Classic First Round against Western Hills on Jan. 7, and will travel to Garrard County to take on North Bullitt in the Dickie Gilbert Three Bank Classic on Jan. 26.

Spivey said Souder has been a great mentor and teacher to her, but she is excited to do things her way.

“I use a lot of what he taught me but I’ve also implemented how I want to do things,” said Spivey. “We have a new team and I’m not him, so I wanted to be able to be me on the sidelines. A lot of the stuff that we’re doing now, I learned over the years from him.”

Mercer County’s biggest challengers in the 12th Region will be Lincoln County, Casey County and Southwestern. All three of those teams are returning majority of their players from the previous season. Spivey knows the defending region champions will have a target on their back, but believes her girls are ready for what is ahead.

The Lady Titans are anxious for the season to start and to begin their defense of their district, region and state titles.

“My staff and I are putting our own spin on things, but a lot of the foundation is the same from when Souder was here,” she said.

Spivey said she still isn’t used to walking into her office as head coach.

“It’s been kind of a whirlwind but it’s been going really well so far,” she said. “It’s a dream come true for me coaching here, because I played here as well.”

Spivey said she has been telling everyone that she’s doing well so far, but with a smile, said to come back and ask how she feels in February.

Mercer County opens their season on Monday, Dec. 3, when they host Somerset at 7:30 p.m.