The Burgin Bulldogs opened their 2018-2019 regular season on Tuesday night, Nov. 27,  with a dominating 73-31 victory over the Danville Christian Academy Warriors.

“I thought the first quarter was as good as we could play coming out,” said Head Coach Don Irvine. “We shut them down pretty well defensively, we were aggressive offensively and we crashed the boards. We hit some shots that makes us look good when they go in. I want to give DCA a lot of credit because they played hard the whole time. It seemed liked they were a little shell-shocked with it being there first game, but I think they got better as the game went on and I think they will get better as the season goes on.”

The Bulldogs scored the first six points of the game and held a 27-6 lead after the first quarter, with Hurst scoring 15 of those 27. He asserted his dominance in the paint, from mid-range and at the foul line.

Junior Wesley Tyler also a had a big first half, scoring 10 points, including two three-pointers. He finished with 11 points.

Burgin’s third leading scorer was senior Ethan Kestler. He scored nine points and went 4-for-4 from the charity stripe.

The Bulldogs led 40-13 at the half, and outside of the Big 3 (Hurst, Kestler and Tyler), contributions were made from up and down the lineup. Juniors Hunter and Seth Martin each scored two points in the first half, with the latter making key defensive plays which led to points on the other end. Seth finished with two points, while Hunter finished with five points.

Sophomore Jackson Qualls, who is the starting point guard, scored four points, two in each half. Qualls is responsible for the little things that do not show up on the stat sheet. Irvine has always referred to Qualls with the highest regard and his heart and hustle rubs off on his teammates.

“I just think our younger guys are more confident and more assertive,” said Irvine. “We’ve really been working with them on believing in themselves. I think you’re starting to see a little more maturity. I believe as they continue to mature and get a little older, they will continue to see development.”

The second half was much of the same for Burgin. Hurst took over, and the rest of his teammates followed his lead. The Bulldogs outscored the Warriors 33-17 in the second half.

Freshman John Boursaw came off the bench and contributed three points, as did sophomore Levi Hale. Eighth grader Hunter Reed, who Irvine said has a bright future ahead of him, contributed five points, including a rainbow from beyond the arc.

The Bulldogs start their season 1-0 and will travel to take on the Kentucky School for the Deaf (KSD) on Thursday, Nov. 29, for their next matchup. Tip-off is set for 6 p.m. 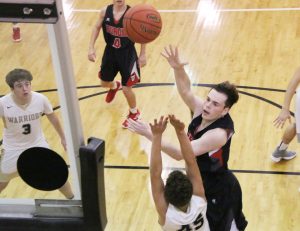 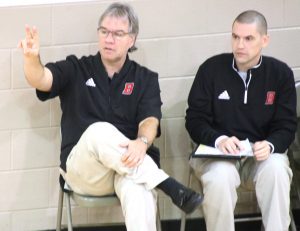 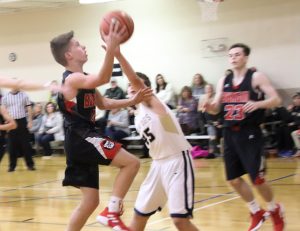 Sophomore Jackson Qualls drives to the rim for an easy two points. 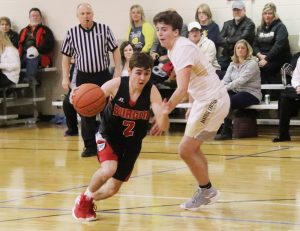 Senior Ethan Kestler looks to get by his man and into the paint. 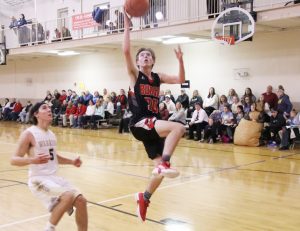 Junior Seth Martin steals the ball and goes coast-to-coast for the easy lay in. 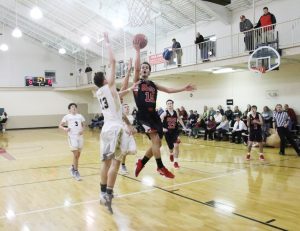 Senior Cameron Hurst drives to the bucket and finished with contact. Hurst had a game-high 28 points.