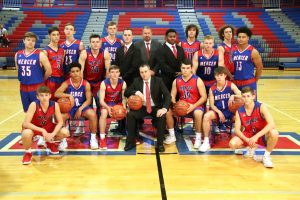 When a season ends in heartbreak, most teams can’t wait to get the following season started. That is the case with the 2018-2019 Mercer County boys basketball team.

After losing on a last second shot to Southwestern in last year’s 12th Region championship game, the Titans are primed and ready for another run at a region title and a trip to Rupp Arena for the state tournament.

Despite returning 11 upperclassmen this season, the Titans have to fill a huge void left by their all-time leading scorer and last year’s Mr. Kentucky Basketball, Trevon Faulkner, who has taken his talents to Northern Kentucky University. The Titans will also be without the services of Gunnar Gillis, Jackson Lewis, Trey Miller and Ty Divine, who have all graduated from last year’s team.

“We lost a lot of scoring, rebounding and leadership,” said Head Coach Josh Hamlin. “Those seniors left a mark on our program from a leadership standpoint where it’s passed on how hard we have to work and what it takes to get to the situation we want to be in, and that’s competing for region and state championships.”

Hamlin said there has not been a day since March since he hasn’t thought about the loss to Southwestern.

“It keeps me up at night. I go back and forth on things,” he said. “It’s just the way it happens sometimes. Repeatedly in the offseason, we remind the team of the score, 46-48. Our guys have really been cognizant of that and have worked really hard. Our goals here at set in place and that’s not to be a regional runner-up.”

The second-year coach leads a squad consisting of six seniors, five juniors, one sophomore and one freshman.

Hamlin’s staff consists of returning Assistant Coaches Kasey McRay and Brian Pendygraft. Mark Dunn is a new member of the staff and will be coaching the freshman team.

Carter Baughman is the top returning scorer for the Titans, and has been the starting point guard the last two seasons under Hamlin and former Head Coach Kurt Young. Baughman is coming off a junior season where he averaged 13 points per game while shooting 50-percent from the field. He has been dubbed by media outlets around the state as one of the top players in the 12th Region.

“I’ve been really lucky and fortunate to coach Carter (Baughman) back when he was in eighth grade,” said Hamlin. “When he was a little younger, he expected everything to go perfect. We’ve had conversations about that this year being a senior, and he’s been a great leader for us. He’s been taking kids by the side and working on his body language.”

He has played in two straight region title games, so the pressure doesn’t phase him. Baughman will turn a lot of heads this winter and will be a player to be reckoned with during his senior season.

Nathan Tatum, who missed his entire junior season due to an elbow injury, returns for his final season.

“Nathan (Tatum) was the x-factor on last year’s team. He was the missing piece. We had quickness off the bench, a little bit of strength but we didn’t really have that other shooter,” said Hamlin. “That was his role last year before getting injured. He adds another dimension to our team that will be huge for us this season. Since he’s been released, he’s been putting in constant work.”

Isaiah Smith is a newcomer to this year’s squad. The senior brings height (6 feet 2 inches) to the team and a post presence the Titans will need this year.

“He is a big, strong kid who moves his feet exceptionally well,” said Hamlin. “He is really intelligent and understands what we want to do on both ends of the floor. He will have a big impact on our team.”

Luke Dean, Jamason Sherrow and Jack Kiernan round out the final three seniors for the Titans.

“Jamason (Sherrow) is the ultimate teammate and post presence down low. If he’s getting 20 minutes per game, or 10 or no minutes, he is always the guy cheering the team on. Everybody needs a Jamason Sherrow on their team,” said Hamlin. “Luke (Dean) has shot up to about 6 feet 5 inches now and plays above the rim. He tries exceptionally hard defensively and his length will be a factor. Jack (Kiernan) is a great leader and student. He never complains and always puts his teammates before himself. For a guy that is a senior, and has been around our program for a while, understands what we want. We are really lucky to have a senior like Jack.”

Kaelin Drakeford is the top returning junior, who averaged eight points and four rebounds per game his sophomore year, will be one of the first scoring options on the court. Drakeford’s athleticism and strength allow him to take physical contact, get to the rim and finish.

“He has the moxie that it takes to be a very special player. He wanted that shot in the region championship game last year. He lined it up and it looked like it should’ve gone it, but it fell short. He didn’t waver at it,” said Hamlin. “He’s been hit by a little bit of an injury bug this summer and we’re slowly working him back.”

Hamlin believes Drakeford is one of the top players in the region, despite not getting the proper recognition.

Micah Cheek, Nathan Dunning, Jamisen Lewis, Trey Price, Bryson Yeast and Kobie Wessling will all be competing for time on the court.

Hamlin said it never hurts to have depth.

“It’s been interesting because in practice we’ve been playing with some lineups,” he said. “We can go quick and small or go a big-man lineup. We got some bruisers we can put in there and spread them out with shooters. It’s a collection that we have a lot of different skill sets. Most teams have seven or eight kids they can go to. We’ve got 10 or 11. They all add a different dimension to our team.”

The two remaining underclassmen are sophomore Sam Baughman, who is Carter’s cousin, and freshman Brayden Dunn.

Both Dunn and Baughman are expected to compete for time, as Hamlin said his team will likely be 10 or 11 guys deep. Baughman is a spot up shooter and is comfortable with any spot behind the arc, while Dunn is an athletic slasher who will get to the rim and draw fouls.

The Titans will be playing in four tournaments and two additional classics.

They will travel to North Laurel High School in London for the Nissan Classic, host the Clash of the Titans before Christmas and will travel to Corbin for the Cumberland Falls Invitational two days after Christmas. Mercer County will also play in the Lindsey Wilson College Classic against Eastern on Jan. 5.

“We want to play tough, competitive games that will help us at the end of the season,” said Hamlin. “There could be times where we lose four or five in a row and people are going to right us off, but I’m telling you, our schedule is up there with the best of them and will pay off in the long run.”

Some of Mercer County’s toughest opponents can be found up and down their schedule but games against West Jessamine, Clay County, Danville, North Hardin, Eastern and Pulaski County stick out more than others. Hamlin knows you have to beat the best to be the best and having a tough schedule will only benefit the team down the road.

The Titans will open up their season on Friday, Nov. 30, when they travel to London to take on Sheldon Clark in the Nissan Classic. Tip-off is set for 6 p.m.