Football season in Mercer County concluded with a loss to Moore in the second round of the Class 4A playoffs on Friday, Nov. 9.

A few days later, junior quarterback Kaelin Drakeford and Head Coach David Buchanan were named District 5 Player of the Year and Coach of the Year by the Kentucky Football Coaches Association (KFCA), respectively.

Drakeford is coming off of his first season playing under center. He went 54-for-109, with 852 passing yards, four touchdowns and six interceptions. Drakeford was even more deadly on the ground, rushing for 531 yards on 106 attempts, with four rushing scores.

Despite the season not ending how he wanted, Drakeford talked about his first season as signal caller.

“This season was a great learning experience for me. Being the starting quarterback, I have a lot more roles such as being a leader and making the best choices for my team,” he said. “We were doubted a lot during the beginning of the season and people didn’t really believe in us. But we had a great group of guys come together around district and we made some noise.”

Drakeford talked about playing for Buchanan during his time as a Titan.

“Coach B (Buchanan) is one of the best coaches in the state. He will do anything for his players and is one of the most unselfish people I know,” said Drakeford. “He is a great mentor and I am very blessed to have him as my coach throughout my high school football career.”

Buchanan talked about Drakeford’s impact as quarterback this year.

“He did an outstanding job this season. His speed and athleticism stand out,” said Buchanan. “His ability to call our run game and also to turn a bad play, or a third and long into a big play for us, make him special. He brings a bunch of intangibles to the table as our quarterback. He would also tell you his teammates on offense, especially our offensive line, make our offense go.”

After being named coach of the year in the district, Buchanan gave all the recognition to his coaching staff.

“Our staff is a great example of putting kids with strong coaches, you can develop and find some players. We were able to get a million miles out of some guys that this time last year weren’t even near the top of the depth chart,” said Buchanan. “Our coaches also developed some kids that really gave us valuable minutes. The ability of our staff will show up even more next season because we are graduating less than 10 seniors this year. Our assistants had to work their tails off developing some younger guys that will make a big impact in 2019.”

The Titans have a big freshman class that will shape the future of Mercer County football. Buchanan attributed that to his freshmen/junior varsity (JV) coach, William Harris.

“You throw in the job Coach Harris and his staff did with out freshmen and JV kids, and our assistant coaches had an incredibly productive year developing football players,” said Buchanan. “In the last five JV games of 2017, we had five JV guys that we put with our freshman. This year, we have 18 JV guys. We are making progress. We just have to keep working each day to make our program better. It is paying off and will continue to do so.”

Drakeford is a two-sport athlete, lettering in basketball and football. He is gearing up for a big basketball season, but talked about his senior football season.

“I expect to be a better leader next season. My fourth year playing varsity and second year playing quarterback, I feel I can bring some experience to my team and I now know what to expect playing the position,” he said. “I feel I can help the team the most in that way by guiding teammates and leading by example.” 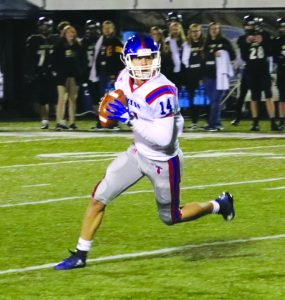 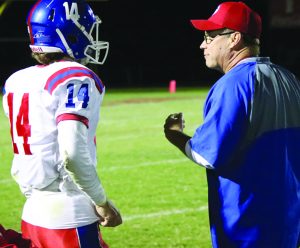 The Harrodsburg Herald/Arpan Dixit Mercer County Head Coach David Buchanan (right) was named District 5 Coach of the Year in 2018. Buchanan is pictured above talking to Drakeford (14) during a timeout. (Photo by Arpan Dixit)