The Mercer County Titans (5-6) were looking for their third straight trip to the Class 4A state quarterfinals coming off of a first round playoff victory against Breckinridge County, but the Moore Mustangs (10-1) stampeded the Titans 26-2 on a chilly night in Louisville on Friday, Nov. 9.

The big discrepancy was in total yardage. Moore out-gained Mercer County by 267 yards, 305-38.

“Their quickness up front on the edge made them tough to block and gave us a lot of problems,” said Head Coach David Buchanan. “They have some very good players and playmakers.”

Moore won the rushing battle 189-37, scoring all of their four touchdowns on the ground. Dewayne Cameron led Moore with 95 yards and two touchdowns. Josiah Taylor was the top receiver for the game with 44 yards. Moore quarterback Rae’Von Vaden was 7-for-21 with 115 yards and one interception. Vaden also had one rushing touchdown.

Junior Malachi Yulee led the Titans in rushing with 17 yards on 14 carries. Junior quarterback Kaelin Drakeford was 1-for-8 for two yards, while also contributing 11 yards on the ground. Junior Lane Horn was the top Titan receiver with onewcatch for two yards.

This loss marked the final game for the Titan seniors.

Blake Russell, Jon Jon Logue, Mason Darland, Jamason Sherrow, Easton Cocanougher, Sam Warren and Toshi Smith played their final high school game against the Mustangs. Another senior who was on the sidelines for the last time was Nathan Tatum, who sat out this season due to injury.

There is always something special with every senior class and Buchanan had nothing but kind words for his parting seniors. “When these seniors were freshmen, they really struggled. Only five of those guys were still on the field at the end,” said Buchanan. “We only had eight seniors total this season. Those guys really overachieved to get a home playoff victory. Their improvement was substantial and I am very proud of them for their effort and how much they improved.”

Buchanan attributed the overall improvement of the team to his coaching staff.  “Our coaches love kids and football. That’s what makes them so effective,” he said.

Moore received the opening kickoff and after the first drive, the Titans were in good position after Vaden’s pass was intercepted by Dillon Warren and the Titans took over at their 31-yard line. Unfortunately, the Titan’s drive following the interception ended in a Noah Davis punt.

Sophomore Bryce Walton was able to force a fumble after Moore picked up a first down, setting up the Titans at their 25-yard line. The drive ended in another Davis punt. Cameron scored his first touchdown of the game on a 39-yard run.

Moore held a 7-0 lead after one quarter. After Davis punted again to midfield, Moore was able to capitalize on the solid field position.

Horatio Willis ran 40 yards for the score and the Mustangs took a 14-0 lead with 10 minutes left in the first half. Cameron added another score, this one from three yards out, to take a 20-0 lead into halftime.

The Titans were finally able to get on the board when Moore’s punter dropped the snap and stepped on the line for the safety. Mercer County was hoping for a momentum change after the safety, but the following drive ended in another Davis punt.

Sophomore Landon McGinnis came in to replace Drakeford at quarterback in the third quarter. McGinnis played the rest of the game. Vaden added the final score on a four-yard run at the start of the fourth quarter to make the game score 26-2, which would end up being the final score.

“For the first time ever in 27 years as a head coach, not a single player quit,” said Buchanan. “We finished with 64, a very good number for 2018. These guys also moved our culture forward in the right direction. This program has a bright future. The 2018 team is a big reason for that.”

Kaelin Drakeford was the top passer this season, going 54-109 for 852 yards and four touchdowns. Dillon Warren was the top Titan receiver with 13 catches for 247 yards and three touchdowns. Malachi Yulee led the Titans in rushing in 2018 with 131 carries, 1,049 yards and 13 touchdowns. Christina McClain was 29-for-29 on extra points this season.

Listed below are the full states for the Mercer County Titans in the 2018 season. 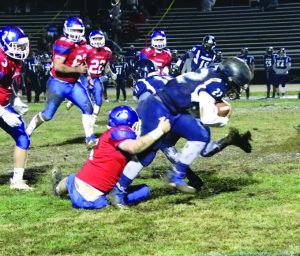 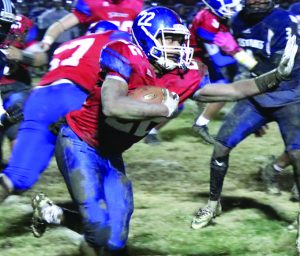 Junior Malachi Yulee uses blocking to get a positive gain on the ground against Moore on Friday, Nov. 9. Yulee led the Titans in rushing with 17 yards. 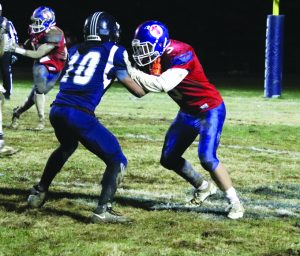 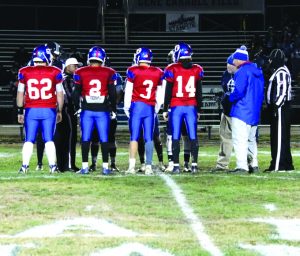 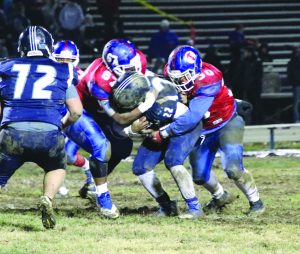 Freshman Brent McKitric (67) and junior Darrian Baker together bring down Moore’s Dewayne Cameron (22) on Friday, Nov. 9, in the second round of the Class 4A playoffs.