The Mercer County Titans (4-6) started their playoff run with a big 43-21 victory over the Breckinridge County Tigers (4-6) in the first round of the Class 4A playoffs on Friday, Nov. 2, at Alvis Johnson Field.

All season long, the Titans have been led by their versatile running game. Junior Bryson Yeast was the top rusher for Mercer County against the Tigers last Friday night, with three touchdowns and 104 yards.

Junior Malachi Yulee was second on the team with 62 yards and one touchdown on the ground.

Junior quarterback Kaelin Drakeford went 2-of-5 for 22 yards passing, but had one touchdown and 40 yards rushing.

Senior Jamason Sherrow led the Titans with 10 tackles. Sophomore Landon McGinnis recovered a fumble and junior Dillon Warren intercepted the ball to lead the Titans on the defensive end.

“Our strength right now is our run game. We have the backs and offensive line,” said Head Coach David Buchanan. “Kaelin (Drakeford) gets us in the right play and also runs well for us. He made the call in the naked bootleg for a touchdown on Friday. Our receivers have been blocking really well. It is very encouraging as we hit November.”

The defense was a big factor in this one. The Titan defense turned four forced turnovers into four touchdowns in a span of four minutes. The Tigers quickly saw themselves down 36-0 with a few minutes left in the first half.

Buchanan has preached all season about his team finishing games with a big lead. Although the Tigers scored three times in the second half on three rushing touchdowns by Trevor Dyer, the last two were against the Titan junior varsity and freshmen team.

As mentioned, the Titan defense was in full force. They only allowed one first down in the first half, and that was due to a penalty. The Titans out-gained the Tigers 300-186 in total yardage, but the turnovers in the first half is what put the game away.

After forcing a punt on Breckinridge County’s first possession, Yeast ran the ball in from 17 yards to give the Titans an early 7-0 lead after Christina McClain’s extra point.

The second quarter was one to remember for the Titans and one to completely forget for the Tigers.

In a wild sequence, the Titans scored an absurd amounts of points to have the running clock rule in effect before the second quarter was even over.

It all started with Sherrow’s fumble recovery that led to a rushing touchdown by Drakeford. The Titans went for two and were up 15-0.

On the following kickoff, sophomore Landon McGinnis recovered a fumble, which led to a 24-yard rushing touchdown by freshman Brayden Dunn.

On the next Tiger drive, Warren intercepted Gavin Dowell’s pass and returned it all the way to the Tigers 25-yard line. Warren’s interception was followed by a Yeast touchdown from four yards out just three plays later.

The Titans scored 29 points in exactly 3:54, and it could’ve been worse for the Tigers. Freshman Jackson Peavler recovered another fumble, but the Titans ran out the half.

The second half went quick. Dyer scored three times and Yeast added his third of the game and the Titan came away with a convincing 43-21 victory.

The Titans were able to use a lot of their underclassmen and Buchanan was happy his younger players got to experience November football.

“I was really happy those guys got to experience a November playoff night at AJ,” said Buchanan. “The highlights for me were the freshman offense getting the final first down to end the game. I was very pleased with both of those units.”

The Titans will travel to Louisville to take on the Moore Mustangs on Friday, Nov. 9.

Moore is the second ranked team in Class 4A record-wise (10-1) and are on a six-game winning streak heading into the matchup.

Buchanan kept it simple when talking about what needs to improve before the big showdown.

“We have room for improvement across the board,” he said. “We will prepare to go do what we do, the best we can. We are excited about the challenge. They have outstanding skill players and play very hard.” 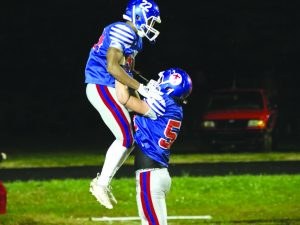 Senior Blake Russell (right) lifts up junior Malachi Yulee (22) after he scored a rushing touchdown against Breckinridge County in Mercer County’s 43-21 victory in the first round of the Class 4A playoffs on Friday, Nov. 2. 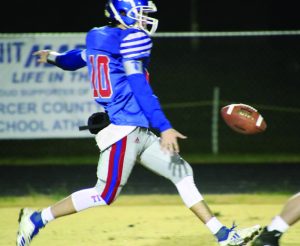 Freshman Trosper Buchanan punts the ball on fourth down late in the game against Breckinridge County on Friday, Nov. 2, at Alvis Johnson Field. 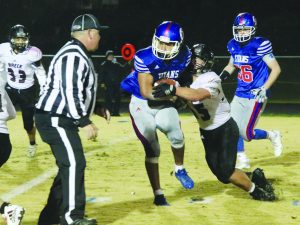 Junior Bryson Yeast (with ball) carries the ball with authority against Breckinridge County on Friday, Nov. 2. Yeast ran for 104 yards and three touchdowns in the Titans’ 43-21 victory over the Tigers.