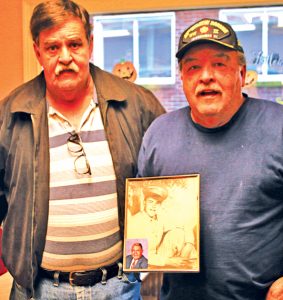 Jackie and Tommy Claycomb hold a picture of their father, William Conrad Claycomb.

He was captured in France and transferred to several prisoner of war camps before being taken to Stalag VII-A. Located in Moosburg, Germany, it was the largest POW camp in the country. For the next nine and a half months, William Claycomb would call it home.

He and thousands of other soldiers were held in bad conditions. He was allowed to contact the Red Cross once. Even though he was out of the fighting, he still feared for his life. A cross word or the wrong look could get a soldier shot. During the five years Stalag VII-A was open for business, over a thousand soldiers died.

On April 29, 1945, the camp was liberated by American troops. Claycomb returned safely to his bride after a brief stay in a veteran’s hospital and the couple raised four children: Tommy, Jackie, Connie and Billy Claycomb. They lost one child, Peggy-Diane, at birth. 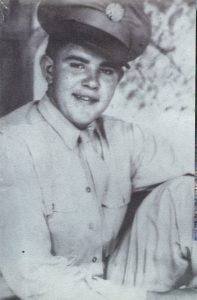 “This is just one story of the hundreds of thousands of soldiers during our wars that either came home safely or ended up MIA or KIA,” Tommy Claycomb recalled recently. “That gave us a real reason to go to Germany and try to find where our father had been held.”

Tommy and Jackie Claycomb traveled to Moosburg, Germany, on their parents’ 75th anniversary. The brothers found all the wooden barracks were long gone, replaced with a memorial that included a water fountain, benches and a cobblestone walkway.

The brothers also journeyed to Dachau, a death camp 20 kilometers from Munich.

“It was surreal seeing the museum with all the propaganda and the chambers where they gassed hundreds of thousands of Jews,” Tommy said. “People need to go see what happened during World War II. They need to relive their parents’ path to fully understand.”

The Claycomb children grew up listening to the hero tale of their father’s story and learning about the sacrifices their mother made to love a soldier.

“Both of the places we visited will be in our memory and our families memory forever,” said Tommy. “We are glad to share this story on Veteran’s Day. I want to say God bless all the veterans and their families.”