Bekah Upchurch began golfing in the fifth grade, encouraged by her dad, she thought she would give it a try.

The eventual success that Upchurch achieved was not expected.

She was told in middle school that the region was too talented and only the best of the best make it through the regional competition. She proved herself to be the best of the best in 2016 when she won the Nelson
County Invitational. She later qualified for state that year as a sophomore, becoming the first Lady Titan to ever do so.

One stroke was the difference in Upchurch’s competing at state for the second straight season. Devastated, she was determined to learn from her experience and come back stronger.

Upchurch has had much success golfing in high school, but nothing came easy.  She persisted through various workout programs and lessons from her coaches in hopes that she would rediscover the euphoria that comes with the state competition.

This season was kinder to Upchurch. She placed second in the Kentucky Classic competition and placed fifth at the  region tournament, securing her place at state. The state competition consisted of 36 holes over two days at the Bowling Green Country Club. Upchurch shot a 161, tied for 20th place.

“When I started everybody told me Lexington was the hardest region and I had little chance to make it to state, but I took that as motivation,” said Upchurch.

Her two appearances at state are what she will remember most about her Titan career, but her golfing success is just getting started.

Upchurch has recently committed to continue her golfing career at Georgetown college, and she is excited about the opportunity to win trophies at the next level. She has high hopes for herself and hopes to be just as successful in college as she was in her high school career.

Head coach of the Lady Titans golf team, Jeremy Brummett, knows all too well the hard work and determination it took for Upchurch to be where she is today.

“She has grown and matured immensely over the past five years. As a coach, it has been an honor to coach her and watch her grow as a person. She’s going to do big things at Georgetown and I’m excited to watch her golf career continue, ” said Brummett.

“I’m really excited because Marlene (Schulte) has really done a lot for the program, she really improves all of the girls. A couple of my friends are coming in with me and we’re all top 20 in the state, and I feel like we’re really going to compete and hopefully bring in some trophies,” said Upchurch.

“We are so excited to have Bekah next year. She has had a great high school golf career and will be able to step in immediately and make a difference for our team,” said Schulte. “Not only is she a great athlete, but a great student too. I look for her to have a great collegiate career and great success within our conference.” 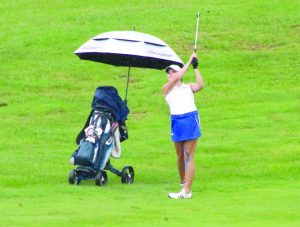 Bekah Upchurch competing at the region meet in Richmond in September. Upchurch qualified for the state meet, finishing fifth. (Photo by Arpan Dixit)