The Titans were able to get on the board first, but Boyle County scored 42 unanswered points to win 42-2 in the regular season finale on Thursday, Oct. 24.

The game, which was previously scheduled for Friday, Oct. 23, was moved back a day due to weather. “I was proud that we did not quit, but we have to play with the same energy and effort for four quarters that we played with in the first quarter,” said Mercer County Head Coach David Buchanan. “If we do so, we can have an outstanding team in November.”

Boyle County junior quarterback Reed Lanter had himself a day, going 17-for-18 for 304 yards and four touchdowns. Reese Smith led the Rebels in receiving with four catches, 114 yards and two touchdowns. Junior Malachi Yulee led the Titans in rushing with 73 yards on 19 carries.

Despite struggling on offense, Buchanan said they will continue to run their offense like they have all season. “We will continue to work both the run and the pass,” he said. “Against Boyle, we did believe that running the ball gave us the best opportunity to win.”

Boyle County came into this game on a 21-game winning streak dating back to last season’s state championship season.

Using a potent passing game and utilizing the run propelled the Rebels to yet another undefeated regular season.

The game started off really well for the Titans. Yulee hauled off a big run to set up Mercer in Boyle territory on the first drive of the game. Unfortunately, the Titans were stopped on fourth and goal at the two-yard line.

The Rebels took over, but quickly gave it back. Yulee tackled running back Landon Bartleson in the endzone for a safety. The Titans were up 2-0 and were getting the ball back.

That next drive ended with junior quarterback Kaelin Drakeford getting stopped just shy of the first down marker. Boyle took over at their 31-yard line and ended the drive with a 28-yard touchdown reception by Smith.

The Rebels added two more scores on two receiving touchdowns from Luke Sheperson to take a 21-2 lead into the locker room.

Tanner Crawford added two more scores to go along with Smith’s second receiving touchdown to round out the scoring for the Rebels. It was a tough game for the Titans, but going against the defending state champions in their class is no easy task.

The Titans will be taking on the Breckenridge County Fighting Tigers in the first round of the Class 4A playoffs on Friday, Nov. 2, at 8 p.m. “Breckenridge County does a really good job with their option and spread game from the shotgun,” said Buchanan. “Gavin Dowell, their quarterback, and their fullback, Trevor Dyer, are very effective players.”

The Titans always travel well, and Buchanan expects Titan fans to be in full force throughout Mercer’s playoff run. “I appreciate the fans that we had at the Boyle game. We will do our best to make Friday night a November night worth remembering at Alvis Johnson Field,” said Buchanan. “We are excited to play in a venue that has hosted so many great November playoff games over the decades. We will do our best to live up to that legacy and tradition.” 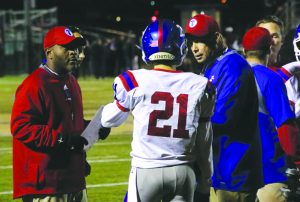 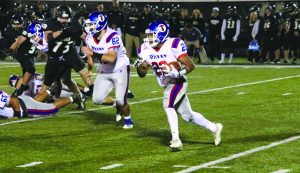 Junior Malachi Yulee (22) takes a handoff to the left side while senior Sam Warren (62) looks for blocking opportunities against Boyle County on Thursday, Oct. 22. 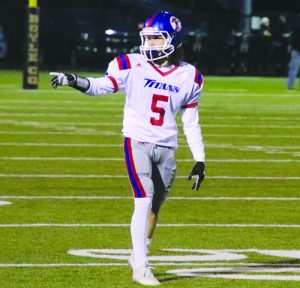 Junior wide receiver Lane Horn points at the official to see if he is on the line of scrimmage against Boyle County on Thursday, Oct. 25. 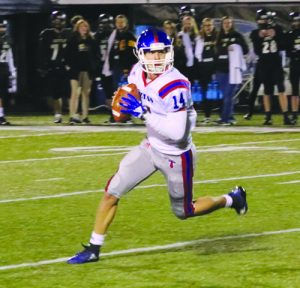 Junior quarterback Kaelin Drakeford rolls out to his right to find a receiver down the field against Boyle County on Thursday, Oct. 25. 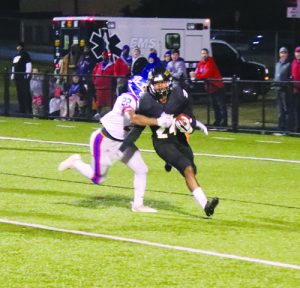