The Titans, now with a 3-1 district record are heading into the final game of the regular season on Friday, Oct. 26, at Boyle County.

Yulee was raised in Harrodsburg, but moved to Alabama at a young age before returning to Kentucky for his freshman season of high school football.

Before this season started, Yulee prepared for the field in the weight room, putting himself above all other Titans, as the strongest player on the team.

Yulee excels for the Titans on both sides of the ball,  starting at running back and outside linebacker.

Despite averaging 100 yards rushing and a little over a  touchdown per game, Mercer County Head Coach David Buchanan believes he is a game changer on defense too.

”His best play was at outside linebacker a few weeks ago in a big district game against West Jessamine, stopping a long run for a touchdown. That was the play of the game.”

“Malachi does a good job and owes a lot to his teammates, ” said Buchanan.

“My main goal this season was to become a better leader, ” said Yulee. “I think I can help the team by doing what I’ve done all year, running hard every play. Something I think I can improve for the playoffs is my blocking,”said Yulee.

Drakeford, although not a running back, is third on the Titans in rushing this season with 450 yards and three touchdowns.

Mercer County’s offense lives and dies through the run game, so having a deep running back core is a big advantage.

Yulee,  accompanied by junior Bryce Yeast and freshman Brayden Dunn have 1,450 yards and 22 touchdowns combined on the season. Add Drakeford’s 450 yards and three scores to that and you have a monster running game and gives opponents fits.

Yeast has also been a weapon for the offense this year, rushing for 460 yards and seven touchdowns. “This year I am expecting to accomplish great things, at least a thousand rushing yards,” said Yeast.

He also credits his success to the offensive line.

“I wouldn’t have the success I’m having running the ball if it wasn’t for the big boys up front. They create holes for me so I can score touchdowns, ” said Yeast.

Dunn has added 350 yards and five touchdowns as well.

Assistant Coach Donald Wayne Smith also coaches the running backs and holds them to a very high standard. His expectation is excellence and he wants his players to lead the team.

“As a former running back, I have pretty high standards, and I can’t say enough about how proud I am of these guys. They all bring something to the table,”said Smith. “When I think about when I first got them to where we are now, I get so excited and I really believe that going into the playoffs we can be a powerful running team. All three of them bring something different to the table, and my goal is to use them one right after the other.” 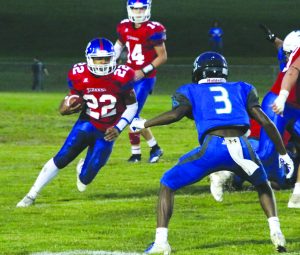 Junior Malachi Yulee has 914 rushing yards and 12 touchdowns this season. 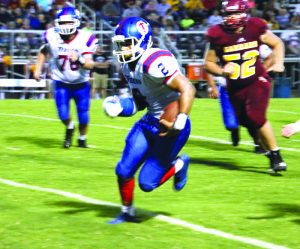 Junior Bryson Yeast has 464 yards to go along with 6 touchdowns. 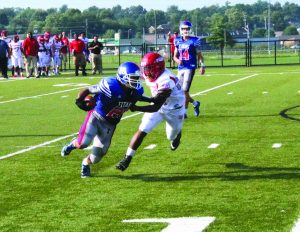 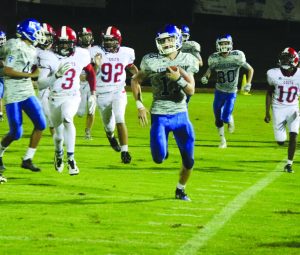 Despite taking over play calling duties this year, junior quarterback Kaelin Drakeford (with ball) has 450 rushing yards and three scores on the season.