All good things come to an end.

The three-year reign for the Mercer County Titans (7-11-2) boy’s soccer team in the 12th region came to an end on Tuesday, Oct. 16, in a 4-0 loss to the Danville Admirals (17-1-1), in the first round of the region tournament, hosted by West Jessamine High School.

The Admirals were lead by Alec McAllister, who scored two goals, one on a penalty kick. Gabe Cisneros and Nathan Hazlett scored one goal each to round out the scoring.

The Titans had their opportunities throughout the game, but were unable to convert.

That senior class goes down as the only one in Titan soccer history to appear in three straight state tournaments.

“I told them that they can’t hang their heads on this game,” said an emotional Head Coach Doug McClain. “They’ve left behind a great legacy that saw them go to three straight state tournaments and that can’t be taken away from them. This senior class has set the bar high for the future.”

The Admirals were looking for revenge. It was the Titans who knocked them out of the region tournament last year in Somerset en route to their third straight region title.

It’s safe to say the Admirals got their revenge in the biggest way.

“Soccer can be an ugly game. Sometimes the ball bounces in and sometimes it doesn’t,” said McClain. “We knew they were going to be tough. They are a really good team. Once we got settled, it was too late. But overall, this season has been great. We’ve had our ups and down like every team. We’ve played a very tough schedule and I think that will help us next season. It’s been fun to coach a great group of kids.” 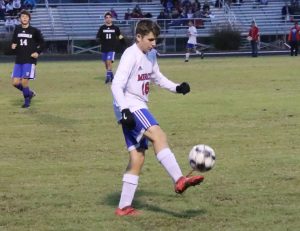 Jamie Bordeaux handles the ball late in the game against Danville in the first round of the 12th region tournament, hosted by West Jessamine, on Tuesday, Oct. 16. 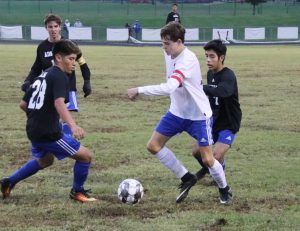 Andrew Turpin (middle) dribbles in between a couple Admiral defenders on Tuesday, Oct. 16, in the first round of the 12th region tournament. 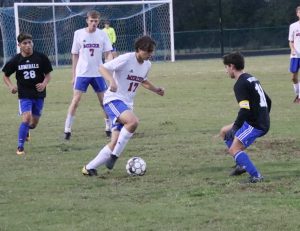 Jeron Winchester (17) handles the ball near midfield against Danville. 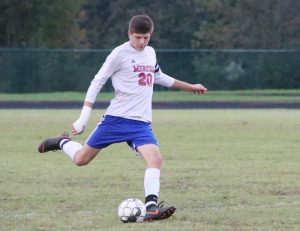 Kola Raskin takes a free kick against the Admirals in the first half. 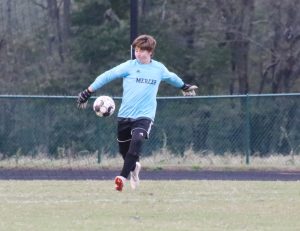 Goalkeeper Aidan West clears the ball after a save against Danville. 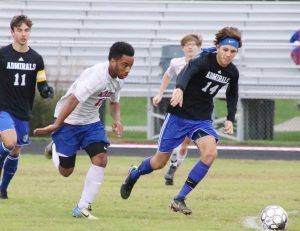 Marcus Lewis (middle) races to the ball with Danville’s Sam Brunner (14) in the first round of the 12th region tournament on Tuesday, Oct. 16.