The West Jessamine Colts (15-4-1) have had the Mercer County’s’ (7-10-2) number this soccer season, and that continued in the championship game of the 46th District on Wednesday, Oct. 10, with the Colts claiming the district title in a 5-1 win.

Micah Tackett led the Colts in goals with two. Chris Siegel, Lucas Labrillazo and AJ Kinnell scored one goal each to round out the five goals for West Jessamine.

Tackett, Kinnell and Labrillazo were named to the 46th District All-Tournament Team after the match.

Junior Hunter Booth, who also made the All-Tournament Team, scored the only goal for the Titans in the 10th minute.

In two games against the Colts this season leading up to the district title game, the Titans trailed in goal differential 10-4. After last night, that differential jumped to 15-1.

“It was my fault. We didn’t come out with any intensity, you know, we just weren’t prepared,” said Head Coach Doug McClain. “We came out flat and didn’t set a very good tone at the beginning of the match. West Jessamine is a really good team. They put it on us. So we’ll regroup. We do get the opportunity to play in the region tournament next week, so hopefully we’ll come out like we did on against East this past Monday and play hard.”

It didn’t take long for the Colts to get on the board. Siegel was able to get the ball past Mercer goalkeeper Aiden West to put the Colts ahead 1-0 in the third minute.

Booth was able to tie it seven minutes later on a volley from inside the box to beat West Jessamine goalkeeper Nolan Yantz.

Unfortunately for the Titans, it was all West Jessamine from there on out.

Two minutes later, Colt freshman Micah Tackett scored the first of his two goals to reclaim the lead for the West.

More trouble came for the Titans in a matter of seconds. Kinnell quickly dribbled to the attacking third and got the ball past West in goal to break open the game at 4-1.

After a 30-minute delay due to lightning, both teams came out to play the final 10 minutes of the first half. West eventually held on for a 4-1 lead at the break.

The second half was much quieter. Labrillazo scored his 24th goal of the season with a strike from the top of the box with five minutes remaining to round out the scoring.

Despite the loss, McClain is looking forward to practice this week as well as next week’s regional tournament at West Jessamine. 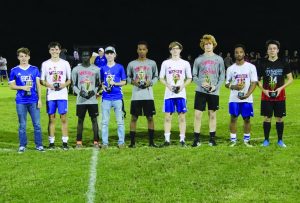 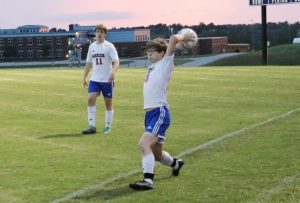 Hunter Booth throws the ball in against West Jessamine in the 46th District Championship on Wednesday, Oct. 10. 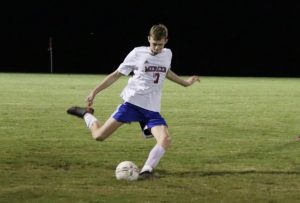 Luke Dean takes a free kick into the box. 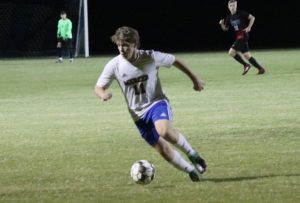 Sammy Berger dribbles the ball on the back line. 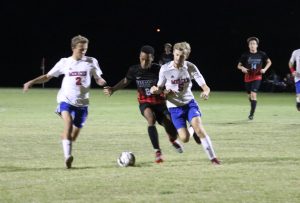 James Johnston (2) and Johnny Johnston (5) battle with West Jessamine’s Micah Tackett (middle) for the ball in the 46th District Championship on Wednesday, Oct. 10.