After starting the season losing four out of their first five games, the Mercer County Titans (3-4) have rallied and won their last three all-important district games and most recently a 36-22 victory over the West Jessamine Colts on Friday, Oct. 5.

After a weather delay of almost two hours, the game kicked off at 9:15 p.m. in front of a very solid crowd after just getting drenched by Mother Nature.

The Titans as a team rushed for 390 yards on 38 carries and four touchdowns.

Junior running back Bryson Yeast had 185 of those 390 yards along with two of the four rushing touchdowns.

“Bryson did a really good job for us tonight,” said Head Coach David Buchanan. “Our line blocked well all night and Kaelin (Drakeford) got us in the right play also.”

Junior wide receiver Dillon Warren led the Titans in receiving with 48 yards on one catch.

Junior signal caller Kaelin Drakeford went 4-for-9 with 88 yards and one interception. He was also a problem on the ground and on defense. Drakeford rushed for 77 yards and also had an interception returned for a touchdown late in the game.

Sherrow was second on the team in tackles with 11 and also had a huge late-game interception to seal the win for the Titans.

“We needed to play him there because of his athletic ability and to win,” said
Buchanan. “He is a very good free safety that can make plays all over the field.”

Similar to last game, the Titans were able to hang on for the win, but also gave up big leads against both Jessamine County schools in the second half. Buchanan talked about the mistakes his team has to fix to not be in those types of situations often.

“The biggest thing is we are learning to win,” said Buchanan. “We are very much a work in progress.”

Mercer started their first drive on their 35-yard line and got all the way down to the West 11-yard line after a run by junior Malachi Yulee and a big 48-yard reception by Warren. Unfortunately for the Titans, the drive didn’t end in points. West recovered a fumble and took over at their 20-yard line.

The Titans were able to force a punt, but turned it over again. West’s Jackson Green intercepted Drakeford’s pass and the Colts took over at their 23-yard line.

The Titans joined the turnover party on the next drive. After a long reception for West that took them to the Titan 11-yard line, junior Lane Horn intercepted Noah Reliford’s pass to take possession back for Mercer at their 15-yard line.

The next drive was a quick one after Horn’s big takeaway. Yulee took it 60 yards to the house to put the first points of the game on the board. Freshman Brayden Dunn ran in the two-point conversion after a West penalty to make it 8-0 Titans.

The Colts were forced to punt on their next drive after a big sack by junior Darrian Baker on third down. Baker had a game-high three sacks on the day. Just like the previous Titan drive, the next one ended in a blur. After taking over after the West punt, Yeast took it 65 yards to the endzone to put the Titans up 15-0 after sophomore Christina McClain’s extra point. She was 4-for-4 on extra points attempts on the game.

The Titan defense held strong on the following possession, combining for a tackle to force a turnover on downs on their 45-yard line.

After a Drakeford keeper and a Baker 17-yard reception, Dunn ran it in from seven yards for the score to give the Titans a 22-0 lead with five minutes to play in the first half.

After forcing another punt, Yeast ran it 77 yards for the score on the first play of the drive and the Titans found themselves with a comfortable 29-0 lead with two minutes to play in the half.

The Titans forced another punt and took over at their 46 with 1:24 to play in the half. The Titans thought they had a 36-0 lead heading into halftime, but Drakeford’s 54-yard touchdown run was negated by a holding call and the Titans settled for a 29-point lead at the break.

Just like last week’s clash with East Jessamine, the second half against West was eerily similar.

The Colts scored their first points on the first drive of the second half on a Kane Lathery five-yard touchdown run. The score was set up by a couple Reliford runs and they trailed 29-7 with eight minutes left in the third quarter.

The Titans offense was finally stopped on the following drive. They faced a fourth and two, were lined up to punt, faked it and were stopped on fourth down.

The Colts took over at the Titan 47-yard line, but punted the ball away.

Drakeford had a big 51-yard run to the West 25-yard line on the play following the punt, but the Titans coughed the ball up again with the Colts recovering.

With one quarter remaining, the Colts made the game interesting.

Desmond James ran it in from seven yards out to cut the Titan lead to 29-15.

Unfortunately for Mercer, they weren’t able to answer. They fumbled again on the West 25-yard line as the Colts were able to recover another ball on the ground.

On the following play, Reliford found James for the 75-yard touchdown reception and the Colts were back in the game at 29-22 with six minutes to play.

The Colts got the stop they needed, forcing a punt and taking over at their 32-yard line, looking to drive down the field and tie the game with four minutes to play.

The biggest play of the game was made by the Titan defense on the following drive.

Drakeford stepped in front of Reliford’s pass at midfield and took it back all the way for the score to give the Titans a 36-22 lead with three minutes left.

After forcing third and five, Sherrow picked off Reliford to ice the game and give the Titans another much-needed district victory.

Drakeford took a couple knees and the clock hit zero at 11:40 p.m.

The Titans look to avenge a 47-19 loss last season on Friday, Oct. 12, when they travel to Campbellsville to take on the Taylor County Cardinals for the district crown and home-field advantage in the playoffs.

“Taylor County is a really good football team and this is an important game for us,” said Buchanan. “We will need to play very well in order to come out on top.” 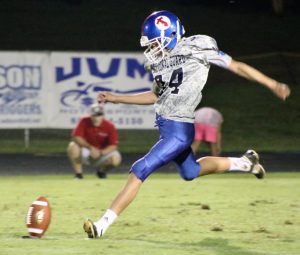 Sophomore kicker Noah Davis gets a drive started with a kickoff against West Jessamine on Friday, Oct. 5. 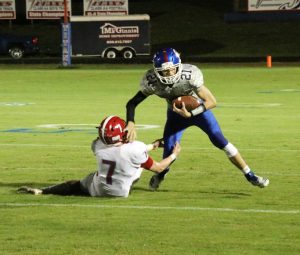 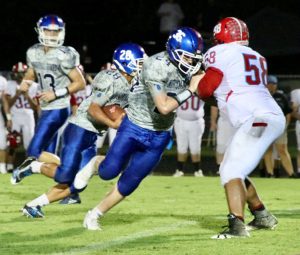