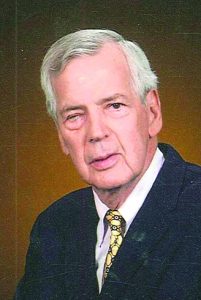 Thomas Clelland Coleman IV, 88, died peacefully in his sleep on October 6, 2018, surrounded by his wife and family.

“T.C.,” as he was affectionately called, was born August 10, 1930, in Harrodsburg to the late Thomas Clelland and Gladys VanArsdall Coleman III.  He was educated at Harrodsburg High School and later at Davidson College in North Carolina where he was a member of the Sigma Alpha Epsilon Fraternity.  He studied there on a scholarship and played basketball for the Davidson Wildcats as a Center.  Like so many others, his college years were interrupted by service to his country.  He returned to Davidson where he continued to play basketball until graduation.  He remained a Davidson Wildcat fan all his life.  An athlete to his core, he had played football and basketball for Harrodsburg as well.

His career in sales spanned many states:  New York, Ohio, South Carolina, Florida and Georgia, the latter being his home for approximately 30 years.  He still retains a home and business there.  Brought up by a devout Christian mother, he never forgot that faith.  As long as his health allowed, T.C. and Betty often attended services in the church where his daughter Gladys serves as senior Pastor.  T.C. was a dynamic, handsome, witty man who will be missed by his wife, family and many friends.

Our family wishes to thank his caregivers Loretta Claunch and Gloria Dye for their incredible empathy and service.

To leave a message or to share your memories with the family, please visit www.alexanderandroyalty.com.