Gaining Experience And A Better Relationship With Local Police 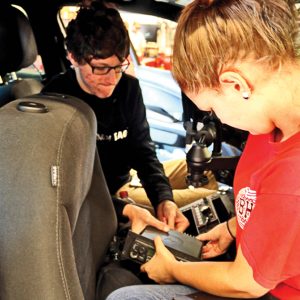 Students Tyler Carrier and Taylor Smith remove a radio from the console of a Harrodsburg police cruiser before installing a new dash cam system.

Two weeks ago, Tyler Carrier, a student at Hughes Jones Harrodsburg Area Tech Center, and Taylor Smith, a Burgin Independent High School student who is attending classes at the tech center through the Trailblazer Career Academy, were caught in the front seat of a police cruiser with a soldering iron and a pair of wire cutters.

The students were actually helping the police. Carrier and Smith are part of a group installing dash cams in Harrodsburg Police Department cruisers.

“This is a real life experience,” said Michael Strickland, an instructor at Harrodsburg Area Tech Center. Strickland called installing the dash cams an example of project based learning.

“Instead of working out of a book, they’re able to research it and do a project in the shop,” he said.

It will also count toward the eight hours of community service students are required to perform in order to graduate. But the project has another dimension as well, Strickland said. 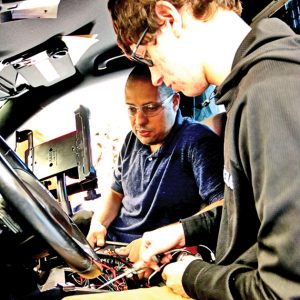 Instructor Michael Strickland guides Tyler Carrier as he prepares to install a dash cam in a Harrodsburg police cruiser.

“They’re able to develop a great relationship with the police,” he said.

It’s not a simple operation. The dash cam systems actually consist of two cameras, one facing the front from inside the cab and the other recording the prisoner in the backseat.

“There will be a constant video stream on that person,” said Patrolman David Patterson.

“It keeps officers accountable,” he said. “The biggest thing is transparency.”

Patterson was trained by the manufacturer on how to install the system. He appreciates the help the HPD are getting from the students.

“We should be done within a few weeks,” he said. “It would have taken me months.”

The officer was asked if he was nervous allowing a high school senior to dismantle and reassemble his police car.