Funding For Possible Solution Is Available 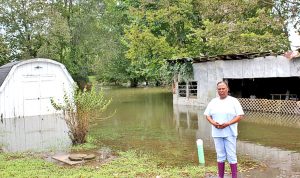 Margie Brothers stands in front of her flooded property on Wednesday, Sept. 26.

Burgin residents are frustrated to be dealing with flooding for the seventh time this year and are looking for answers.

While the city has always been prone to flooding during heavy rains, residents and officials say the recent flooding is unprecedented.

“In the 47 years I have been in Burgin, I have worked every flood, but the last three or four floods have been severe with water staying over roads for more than six days,” said Mayor George Hensley.

The city relies on a sinkhole located on Water Street as a makeshift drainage system. However, residents and officials say the construction of Burgin’s sewer system has changed how quickly the sinkhole drains.

“We didn’t have a problem with drainage before the construction of the sewer,” Hensley said.

The city has borne most of the cost of dealing with the flooding, including renting pumps. In September, the city paid approximately $26,000 to rent and operate the pumps, Hensley said.

The mayor, who said he thinks a survey needs to be conducted on the drains, said he was frustrated by lack of help from Frankfort. Without help from either the state or federal government, the flooding is not going to get better, he said.

Mike Sanford, executive director of the Mercer County Sanitation District, said sewer construction may have slowed the drainage, but said the definite cause is unknown.

“You would be fooling yourself if you didn’t think a construction project of this magnitude didn’t have an effect on the environment,” said Sanford. “The water has changed. It is moving different.”

However, the sanitation district cannot do anything about Burgin’s lack of drainage because it does not fall within their jurisdiction.

“The scope of the project was to provide public sewers to the approximately 500 aged and inadequate septic tanks,” said Sanford. “No storm water drainage improvements were included and our creating ordinance only allows us to provide sanitary sewer service.”

He said the district’s contract with Danville—which treats Burgin’s sewage—requires rainwater to be eliminated from the city’s outflow before treatment. State and federal governments are working to eliminate combined sewer systems, which handle storm water drainage as well as sewage, across the United States.

Sanford said the sanitation district could not intervene in the storm water situation but said they would do whatever they could to solve it.

“We have a vested interest in a solution,” said Sanford. “Our sewer system is also underwater.”

He suggested starting a mitigation process, where engineers assess the situation and provide options.

The good news is that there is state and federal funding available to help mitigate the issue, Sanford said. “Storm water management is required under the Clean Water Act, therefore funding is available through the Kentucky Infrastructure Authority,” Sanford said. “I think the issue can be fully reimbursed.”

“The disaster monetary threshold for Mercer County is set at $78,498,” McFerron said. “I really hate it because I want to be able to help the people in the area that have gotten affected but other than having Red Cross help them with some rooms and clothes, there isn’t much we can do at this time.”

He said he planned to contact the state to see if they’d review the situation. McFerron also said he hoped much of resident’s damage could be recovered through insurance, but not many residents own flood insurance, which can be expensive and is not required for people who live outside a recognized flood plain.

According to the Federal Emergency Management Agency’s (FEMA) flood insurance rate map, the houses in Burgin are not in a flood zone. According to FEMA’s website, standard homeowner’s insurance does not cover flooding and some carriers don’t offer it. FEMA says that homeowners who live in a high-risk flood zone are required to get flood insurance but residents of the affected area in Burgin are not in a designated flood zone.

However, FEMA highly recommends all homeowners get flood insurance no matter their designation because they say flooding can happen to anyone.

Neither George Bowman nor Margie Brothers have flood insurance. Bowman has been out of a home since Sept. 5, when the house he was renting was flooded.

“For four days I had to wear what clothes I had on my back, no underwear or anything,” said Bowman. “It has been rough, working on my job for 22 years and the flooding pretty much took it overnight.”

Bowman said he was out of work until Sept. 24, going without pay while dealing with the disaster.

Brothers said she had six feet of water in her basement in early September and was again flooded last Wednesday.

“I am so tired of it,” said Brothers. “I lost everything a week or so ago. My hot water heater, my winter furnaces and all my stuff was buried under two inches of mud and mold once the water was gone.”

Both Bowman and Brothers said they feel forgotten and are at a loss of what to do. While the Red Cross helped Bowman during the first few days after the initial September flood and the county provided a dumpster, residents say they feel little has been done to help them or to relieve the situation.

This year has been a rainy year. According to the National Weather Service, Mercer County has seen 53.17 inches of rain in 2018, coming close to the wettest year since 1890.

For more information on FEMA or their recommendations on flood insurance visit fema.gov.