Defeating the defending state champions is always a daunting task.

The win gave West Jessamine the number one seed in the district tournament in a few weeks.

Caroline Absher’s goal in the 40th minute gave West a 1-0 lead heading into halftime and Audrey Henry’s header off a corner in the 42nd minute propelled West to a 2-0 victory.

Just like the last meeting between these two teams, it was scoreless until the final minutes of the first half.

“I feel like as a team, we played an entire game. It was a team effort, despite the loss,” said Head Coach Josh Culver. “We had to play very strong and constant defense against a very strong offensive team. We had a couple opportunities offensively, but unfortunately we didn’t get any goals out of them. We just have to stay focused and have to make sure that there is no time where we get lost in the game, because if you do that against a team like West Jessamine, they will capitalize.”

The Lady Titans had a couple chances in the and second half off the foot of senior Lyzzi Prigmore but weren’t able to convert.

“They scored goals at the end of the first half and the beginning of the second half,” said Culver. “But every one of our girls played hard. They left it all out on the field and I was very proud of the way they played the game.

The Lady Titans will begin district play next week as the second seed in the 46th District. Follow @HBurgHerald on Twitter for district information throughout the week. 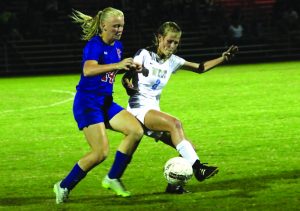