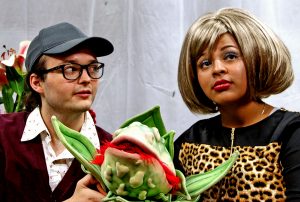 Ragged Edge Community Theatre is kicking off their new season with an old favorite.

“Little Shop of Horrors” is the timeless story of a girl, a boy and a man-eating houseplant from outer space. The musical, which features Alyssa Wray as Audrey, Matthew Curtis as Seymour and Audrey II as itself, opens Friday, Sept. 28, with performances running through Oct. 7.

Starting with a 1960 black-and-white movie directed by Roger Corman and featuring Jack Nicholson in one of his first roles, “Little Shop of Horrors” has grown like a kudzu vine over the decades. It was adapted for an Off Broadway musical by Alan Menken and Howard Ashman in 1983 and turned into a yet another movie in 1986 starring Rick Moranis as Seymour and Ellen Greene as Audrey. According to Ragged Edge Executive Director Allan Barlow, the theater produced a version of it over a decade ago.

It’s not the only returning favorite this season, which is Ragged Edge’s 35th. Barlow will return to the stage in his one-man production of “A Christmas Carol,” which will run Dec. 7-9. Barlow has been acting out Charles Dickens’ holiday classic for 15 years. This will be the eighth year he’s done it at Ragged Edge.

There will also be a lot of new productions this year. Ragged Edge is one of the first non-professional companies in the country to do “Mamma Mia!” the jukebox musical featuring the songs of ABBA, which will premier June 21, 2019.

The theater will also stage readings of three new plays in August during their first ever New Works Festival.

• Charles Dickens’ “A Christmas Carol” runs Dec. 7–9. Allan Barlow acts out all the roles in the holiday classic.

• “The Marvelous Wonderettes” runs April 26–28 and May 3–5. A jukebox musical featuring songs by the girl groups of the late 1950s and early 1960s. Directed by Chuck Taylor with Natalie Berry Marshall as musical director. Auditions will be held Feb. 23 and 25.

• “Mamma Mia!” runs June 21–23 and June 28–30. This musical built around the music of ABBA is one of the longest running shows in Broadway history. Directed by Elizabeth Meredith with music direction by Margaret Meredith. Auditions will be held April 6–7.