Missing the state tournament is tough after all the work a golfer puts in during the season, but missing it by one shot is devastating.

That is what Mercer County senior Bekah Upchurch endured to end her junior season in 2017, but she came back her senior season and played her best golf when it mattered, shooting an 80 to qualify for the KHSAA state golf championships in Bowling Green from Monday through Wednesday, Oct. 1-3.

“At first, when I missed it last year, it was tough. I had a hard time getting over it,” said Upchurch. “After a long time of thinking I decided to turn it into motivation, so I worked even harder to make sure that I had the best chance of making it to state. It’s an amazing feeling. U have worked hard to make it to state and be able to represent Mercer County in the state tournament.  I am ready to make my school proud. It is very sentimental that I made it my last year.”

Upchurch’s round on Monday was postponed while she was playing well, said Head Coach Jeremy Brummett.

“When play was suspended on Monday, Bekah (Upchurch) was tied for first,” he said. “It’s hard in the game of golf to stop play and pick up back where you left of the next day. I’m proud of her for being able to come back and overcome that.”

The 7th Region girl’s golf tournament was held at Gibson Bay Golf Course in Richmond, originally slated for a morning tee time on Monday, Sept. 24, but the remaining few holes were played on Tuesday, Sept. 25.

The Lady Titans only have two golfers on their roster. Along with Upchurch is sophomore Emily Bechtel.

She shot a 101 and Brummett said she has improved tremendously in the short amount of time Bechtel has played the game of golf.

“As a sophomore, she’s grown so much as a golfer and as an individual,” said Brummett. “Hopefully by the time she’s a senior, she’s competing for an opportunity to go to state as well. She has the work ethic. She just needs to decide if she wants to be that type of golfer or if she wants to be a casual golfer as I like to put it.”

Bechtel played 16 holes on Monday, and came back to finish her final two holes, while a lot of competitors stayed home.

“I’m very proud of her for wanting to come back and finish,” said Brummett.

He also talked about weather being a factor out on the course for Upchurch and Bechtel.

“They battled through some tough conditions which were rainy and wet,” said Brummett. “And on Tuesday, it was dry, but the wind was a big factor. The wind is definitely a different element to play in than the rain.”

Follow The Harrodsburg Herald on twitter (@HburgHerald) throughout the week to get updates on Gritton’s tee time. 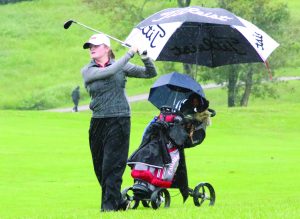 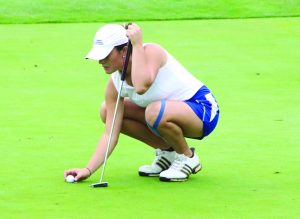 Senior Bekah Upchurch looks at her line before a putt at the 7th Region girl’s golf tournament at Gibson Bay Golf Course in Richmond on Monday, Sept. 24. 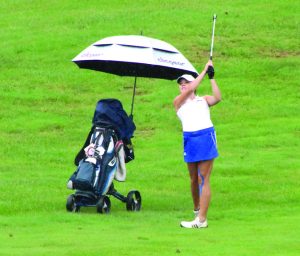 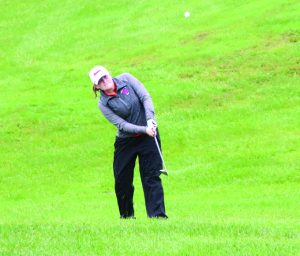 Bechtel hits a shot out of the rough on Monday, Sept. 24, at the 7th Region girl’s golf tournament.