The weather has not been kind to the Titans this season. They had to cancel the second half of their game with Anderson County a few weeks ago due to lightning.

Malachi Yulee, who has had a very strong season on the ground, continues to put up numbers. The junior put up 210 yards on the ground along with three touchdowns to lead the Titans.

Junior quarterback Kaelin Drakeford went 3-for-6 for 155 passing yards, one touchdown and one interception. The signal caller also had 62 yards on the ground and one touchdown.

Freshman running back Brayden Dunn had 121 yards on eight carries with one touchdown. Sophomore Jalen Lukitsch had one rushing touchdown to go along with 27 yards.

Junior defensive lineman Darrian Baker led the Titans with 13 total tackles and also had one sack.

After the game, the Titans were swarmed by their fans in the pouring rain as they sang their fight song after a big win.

“I’m glad everyone was excited tonight,” said Head Coach David Buchanan. “It’s a good thing for our kids and for our school.”

The Titans had 473 yards on the ground with six rushing touchdowns, their most in a game this season. Buchanan attributed that to this offensive line.

After a big return by Dillon Warren after a Marion County punt on their first possession, the Titans gave the ball right back. Yulee lost a fumble on Mercer’s first drive to give the Knights the ball at the Mercer 19-yard line.

Baker made his presence known on the next drive by stopping Marion County’s Mason Brown behind the line for a turnover on downs.

Baker was a force on defense, leading the team in total tackles with 13 and also tied for the team lead in sacks with one.

On a big third down, Yulee was able to break free for a 44-yard score on Mercer County’s next possession to put the Titans up 7-0 after sophomore kicker Christina McClain’s extra point.

The Titans forced a punt on the Knight’s next possession and quickly scored on the other end. Warren was able to get free and catch a 50-yard touchdown pass from Drakeford to give the Titans a 14-0 lead.

Marion County were looking to get on the board, but Jon Jon Logue had other plans. He was able to pick off Marion County’s Mason Sullivan for his team-leading fourth interception of the season to set the Titans up at their 18-yard line.

That drive ended with a 20-yard touchdown run by Brayden Dunn. He set himself up on that drive for the score after reeling off a huge 45-yard run on the drive. The Titans were up 22-0 after Warren’s two-point conversion with 8:30 to go in the first half.

Marion County scored their first points after driving down the field and scoring on an 11-yard touchdown reception by Marcus Yantis from Sullivan. The Knights went for two points and converted to cut the deficit to 22-8 with four minutes to go in the second quarter.

Mercer County was looking for a score before halftime and  got one. Yulee was able to break off a 57-yard run to give the Titans a 29-8 lead heading into the locker room.

The Titans received the second half kickoff and it was deja vu all over again. Yulee reeled off another 57-yard touchdown run to put Mercer County up 36-8 with the third quarter just getting started.

The Knights faced fourth and long after a Baker sack. The Titans eventually forced another turnover on downs and took over at their six-yard line.

Logue had a big 58-yard reception on the drive. Drakeford eventually scored on a 23-yard run to end the drive.

The Titans held a commanding 44-8 lead after Dunn’s two-point conversion.

Mercer County’s final score was set up by a Dillon Warren interception. Jalen Lukitsch was able to punch it in on a five-yard run with 1:32 to play. The Titans earned a big district win against the Knights, one that they very much needed heading into more district matchups in the coming weeks.

Buchanan said he liked where his team is heading after this win.

“I think we’re heading in the right direction, but we still have a lot of work to do,” he said. “I’m not going to overreact, you know, we’re not quite there yet but tonight was better. We’ve done pretty good against Garrard County and Marion County. We got everybody in and our young guys scored. I’m really pleased with our young guys.”

The Titans will be back on the gridiron Friday, Sept. 28, when they travel to East Jessamine for another big district matchup. 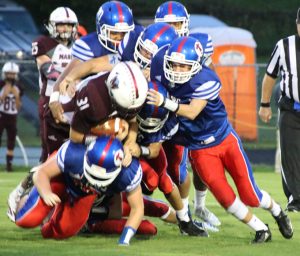 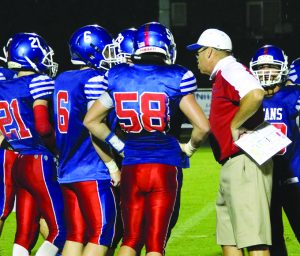 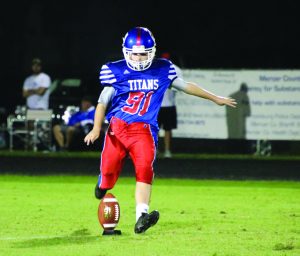