The Mercer County boys golf team was uncertain they would even get a round in on Tuesday, Sept. 25, after rain swept through the area.

Once the decision was made to play Tuesday morning, four Titan golfers competed in the 7th Region boys golf tournament at Danville Country Club. They finished tied for sixth overall with Bardstown.

Gritton qualified for state and finished tied for second overall, shooting one over par for a 73.

This is the junior’s first time qualifying for the state tournament. On hole 17, Gritton was two under par and had to par out to shoot 70 and possibly win the tournament. Unfortunately, he triple bogeyed, but parred on 18 to finish out the day tied for second, which qualified him for state.

“I had been playing amazing all day so I just had to finish strong,” said Gritton. “I was so relieved. All my hard work is finally paying off.”

Head Coach Jay Anderson talked about Gritton and the day he had.

“He had an unbelievable round. The conditions were not ideal for scoring. The course was very saturated and it was windy. So shooting 73 in ideal conditions is a great score, but under the conditions he played in, it’s outstanding,” said Anderson. “He had a game plan and he stuck to it. Danville is a course that he is very comfortable with. I think that helped. He made some key up and downs early in the round for par and it got him going a little bit. You could see him getting more confident as the round went on. He’s a great young man and he puts in the time to golf. He represents himself, his family and our program in the highest way possible.”

Mercer County has played with heavy hearts this season, having lost their Assistant Coach Phil Williams before the season began.

Anderson wore Williams’ Titan golf pullover for luck and it came through. Gritton said Williams was with him every step of the way on Tuesday.

“I miss Coach Phil every single day. There isn’t a time that I step on the golf course  and don’t think about him,” said Gritton. “I remember everything he told me about the game. He had so much faith in me that I could accomplish this first goal of many. I asked coach why he was wearing a pullover because it was hot outside, he just smiled at me and walked in front of me and pointed to the back of his jacket where Williams was written.”

“I will prepare for state by putting myself in pressure situations during my practice, because that is what state is all about,” he said. “My mental game is getting better everyday, but that is what I will be working on the most.”

Gritton is excited to be playing on high school golf’s biggest state in the state of Kentucky.

“I am super excited to get some exposure and get my name out to some college coaches,” he said. “I am also looking forward to playing against the best players in the state.”

Anderson said he wished Coach Williams was there to see it, but he knew he was watching.

“He had the best seat in the house,” said Anderson. “He would’ve been as proud of Reed as I am.”

Anderson talked about Dean, Thompson and Smith and their rounds.

“With Sam (Dean), we worked the night before and tried to work on not overswinging the ball. Unfortunately, he went out and did exactly that. On the back nine, he decided to not overpower the course.”

Dean shot a back nine 43, his best ever score through nine holes in his high school career. Dean wasn’t able to qualify for the state tournament, but he ended his high school golf career on a high note.

“Logan (Thompson) and Jordan (Smith) didn’t qualify, but we will be relying on them heavily next year along with Reed,” said Anderson. “We have a lot of young guns for next season. The present is extremely exciting, and the future is even more exciting. I’m just super proud of all of our guys and the work they have put in this season.”

Follow The Harrodsburg Herald on twitter (@HburgHerald) throughout the week to get updates on Gritton’s tee time. 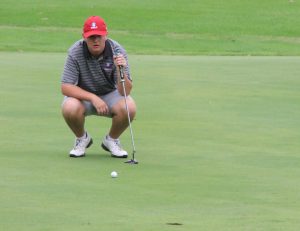 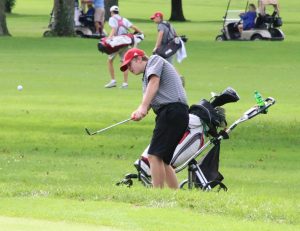 Jordan Smith hits a ball out of the rough on to the green at the 7th Region boys golf tournament at Danville Country Club. 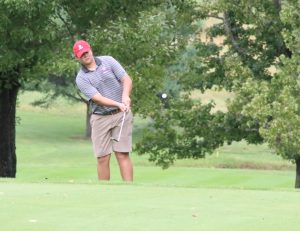 Sam Dean hits a shot on to the green at Danville Country Club. 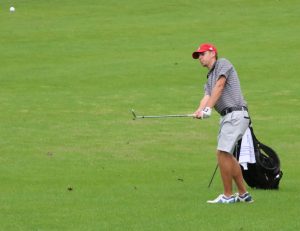 Reed Gritton hits an approach on his front nine at Danville Country Club.